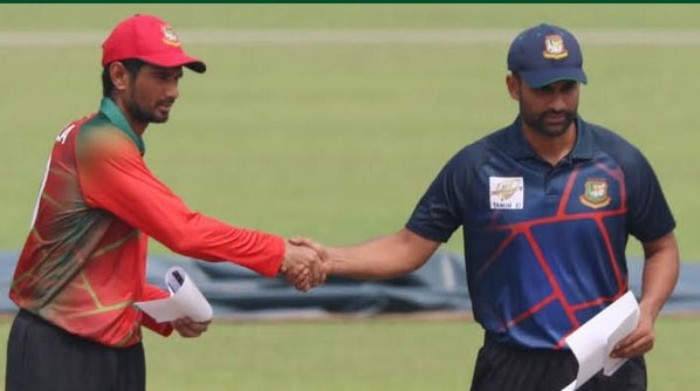 Tamim XI’s captain Tamim Iqbal won the toss and decided to bat first against Mahmudullah XI in the fifth match of the BCB President’s Cup at Sher-e-Bangla National Cricket Stadium on Monday.

Mahmudullah XI was in cornered situation after losing two in their three matches. They started the tournament with a four-wicket defeat to Nazmul XI before bouncing back in style, beating Tamim XI by five wickets. However they were crushed by Nazmul XI in return leg match by 131 runs, a defeat that also spoiled the condition of their run rate.

Tamim XI meanwhile played two matches-losing one and winning one. They conceded a five-wicket defeat to Mahmudullah XI but clawed their way back into the tournament with a 42-run win over Nazmul XI.

A win in the match would help Tamim XI seal the final straightway while a defeat would ruin Mahmudullah XI’s aspiration.

Tamim XI brought up two changes with Yasir Ali and Mohidul Ankan coming in the team in the place of Shahadat Hossain Dipu and Akbar Ali.