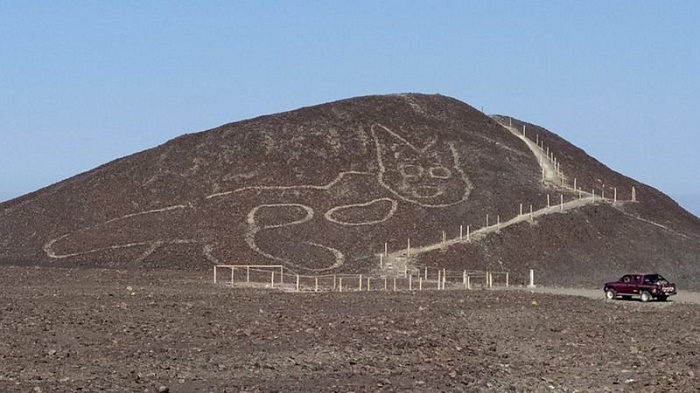 The figure of a relaxing cat has been discovered in the Nazca desert in Peru.

The Nazca lines, a Unesco World Heritage site, is home to designs on the ground - known as geoglyphs - created some 2,000 years ago.

Scientists believe the cat, as with other Nazca animal figures, was created by making depressions in the desert floor, leaving coloured earth exposed.

The cat then went unnoticed until plans were recently drawn up for a new path leading to an observation platform.

The platform would have provided a vantage point for visitors to see many of the other geoglyphs.

In a statement, Peru's culture ministry said: "The figure was scarcely visible and was about to disappear, because it's situated on quite a steep slope that's prone to the effects of natural erosion."

It added that the geoglyph, which is about 37m (120ft) long, has been cleaned and conserved over the past week.

Johny Isla, Peru's chief archaeologist for the Nazca lines, told Efe news agency that the cat pre-dates the Nazca culture - which created most of the figures from 200 to 700 AD.

"We know that from comparing iconographies," he said. "Paracas textiles, for example, show birds, cats and people that are easily comparable to these geoglyphs."