Rajshahi to get a river port to boost trade with India 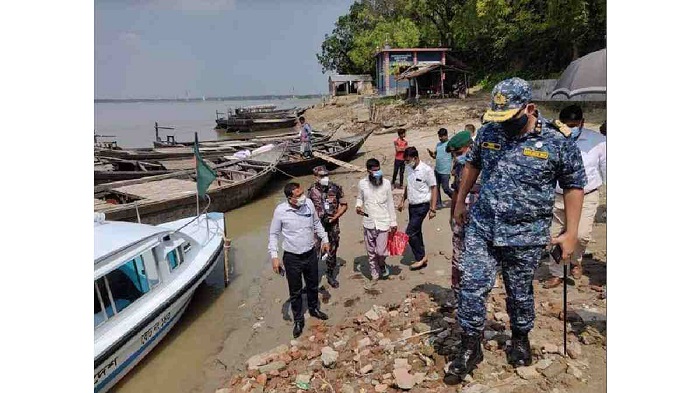 A river port is going to be set up in Godagari upazila of Rajshahi district within a month, aiming to ease transportation of goods through waterways with India.

Goods will be brought to Sultanganj of the upazila from Maya Port of Murshidabad in India via the Padma River.

He also visited the border area in the Padma River in a speedboat and exchanged views with officials of the local administration and public representatives.

Speaking at the meeting, the BIWTA chairman said both the countries would be benefitted from the launch of the waterway through Godagari. “Today we inspected everything, including the navigability of the river,” he said.

The BIWTA chairman went on saying, “There’re huge potentials...we want to launch this waterway on an experimental basis within a month.”

Joint Secretary of the Ministry of Shipping Muhidul Islam and Upazila Chairman Jahangir Alam were present at the meeting.

Meanwhile, upazila chairman Jahangir Alam said once goods used to be transported between the two countries through Godagari which was closed a long time ago.

He said jute products used to go to India through this way at that time and those products could be sent again once the waterway is launched.

“Huge fish are produced in Rajshahi. These fish can also be exported to India. This will benefit Bangladesh economically,” Jahangir Alam said.

Sources at BIWTA said India and Bangladesh have agreed in principle to resume trade through the waterway on the Padma River.

BIWTA officials are now inspecting the infrastructures of the waterway.

BIWTA officials say the launch of the waterway will boost the country's trade with India as huge goods can be transported through this waterway.

Though a 78-km waterway from Rajshahi to Dhulian in Murshidabad in West Bengal was approved earlier, there has been no follow-up action.

Now, BIWTA has taken the initiative to shorten the new route from Sultanganj in Godagari upazila of Rajshahi to the Maya River Port.

The distance of this route is only 18 kilometers. During the dry season, 200-300 tons of goods can be transported in each cargo.

During monsoon, transportation of goods will be a bit difficult due to strong current in the river.

BIWTA has already requested the National Board of Revenue (NBR) to set up a customs office at Godagari.

According to the sources, Murshidabad's 'Pakur Pathar' is being used in big projects like Rooppur Nuclear Power Plant. It is a very good quality stone.

Importing the stone by road is expensive. The Godagari-Maya waterway will be used mainly for importing Pakur stone, according to the sources.