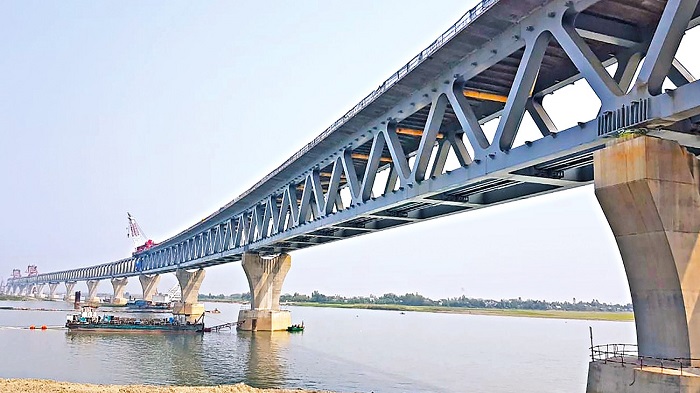 All 41 spans will be installed on the Padma Multi Purpose Bridge by the next two months as three more spans to be fixed in October.

“We have a plan to install all of the 41 spans on the bridge, only 9 spans were left to be set up,” Project Director of Padma Bridge Md Shafiqul Islam told media on Sunday.

He said three more spans will be installed on the Padma Bridge over the mighty river by this month. As per the schedule the 33rd span of the bridge will be placed on the 3rd and 4th pier on October 20, the 34th span will be lifted on October 25 and the 35th span on October 30.

The project director said now over 4.8 kilometers of the bridge became visible with installing the 32nd span–linking the 4th and 5th piers at Mawa end on 11 October.

“A total 41 spans will become visible on the bridge together in December, as the pace of work is going fast with maintaining proper health guidelines during the coronavirus pandemic,” he said.

According to project details, the 34th span of the bridge will be placed on 4th November, the 38th span on 11th November, 38th on 16th November, 39th on 23rd November and the 40th on 2nd December.

Besides, the last and 41st span of the Padma Bridge will set up on the 12th and 13th piers of the bridge on 10th December, it said.

According to the Padma Bridge authorities, the 6.15km-long bridge with a total of 41 spans will become visible in December and the entire Padma Bridge will be seen by the beginning of 2021.

The Padma Bridge is the largest construction infrastructure since the independence of Bangladesh, which was initiated Prime Minister Sheikh Hasina. The construction work began in December, 2014 with own fund.

The construction of the main bridge is being made by China Major Bridge Engineering Company (MBEC), a Chinese contractor Company, and the river management is being done by Sino Hydro Corporation of China.

The 6.15 km long bridge will have two segments over which road and railways will be set up.