Global security to be at stake if Rohingya crisis left unresolved: Dhaka 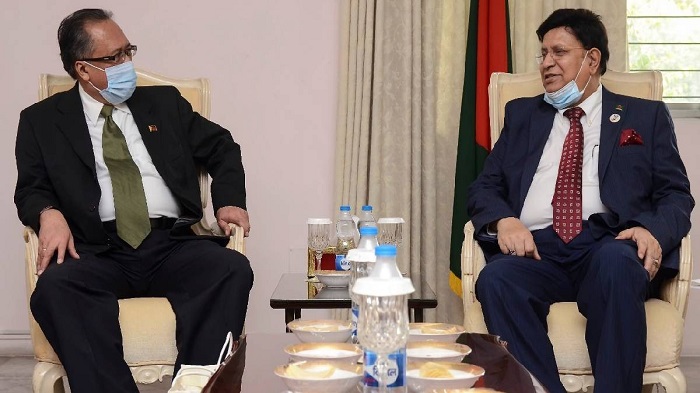 Bangladesh on Sunday cautioned that if the Rohingya issue is not resolved immediately, radical elements can take advantage of the displacement and "regional and international security would certainly be jeopardised".

Bangladesh requested the Philippines to exert political pressure on Myanmar together with all ASEAN members to take back the Rohingyas.

Foreign Minister Dr AK Abdul Momen made the request through Ambassador of the Philippines Vicente Vivencio T. Bandillo on Sunday.

At the meeting, the Forign Minister sought Philippines’ support on voluntary and sustainable repatriation of the Rohingyas to their place of origin in Rakhine State, according to the Ministry of Foreign Affairs.

Dr Momen noted that the Philippines enjoy close ties with Myanmar that the latter should leverage its influence to resolve the Rohingya crisis.

To allay the fear of the Rohingyas, he said, Bangladesh has long been proposing formation of an ASEAN-led nonmilitary civilian observer group but Myanmar is not coming forward positively to implement this proposal.

Terming the Philippines as a global leader in the services sector, particularly nursing, marine engineering and seafaring, Foreign Minister said Bangladesh is keen to sign the pending MoU on nursing education with the Philippines as early as possible and initiate exchange programmes of student and staff nurses between the two countries.

The Ambassador assured the minister of doing the needful for completing the MoU soon.

Pointing out that there is a huge scope of Filipino investment in the agro-processing sector, the Bangladesh Foreign Minister suggested that Filipino franchise Jollibee and Potato Corner can open outlets in Bangladesh.

After a stint of six years and a half in Dhaka, the Ambassador of the Philippines Vicente Vivencio T. Bandillo is returning to the headquarters at the end of this month.

He paid a farewell call on Foreign Minister Dr Momen at the State Guest House Padma.

The Foreign Minister sought Philippines’ support on recovery of Bangladesh Bank money lost in a cyber heist in February 2016.

Dr. Momen thanked the government of the Philippines for all-out support to the government of Bangladesh in getting back $15 million of the $81 million stolen by the hackers and expressed the hope that the Filipino government would continue support till the remainder of the money is recovered.

Ambassador Bandillo assured of extending full support to the Bangladesh Bank over the money recovery issue and said his government has initiated some measures to combat money laundering which is a huge national problem.