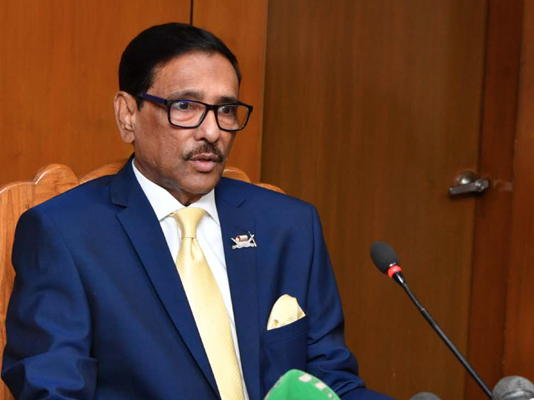 Awami League General Secretary Obaidul Quader on Sunday said BNP joined the by-polls to make the government and the Election Commission (EC) questionable as they staged ridiculous drama in the name of taking part in the election.

“After failing in democratic practice, BNP becomes a party of complaints in the last one decade. Failing in election and shifting the liability of their failure in election to the government and the Election Commission has become regular activities of BNP,” he said.

Quader, also road transport and bridges minister, was addressing a discussion arranged by Awami Swechchhasebak League marking the birth anniversary of Sheikh Russel at Institution of Diploma Engineers, Bangladesh (IDEB) here. He joined it through a videoconferencing from his official residence on parliament premises.

He said Prime Minister Sheikh Hasina’s government and Awami League are determined to protect and keep intact the democratic rights of the people.

After failing in the by-polls to both seats– Noagaon-5 and Dhaka-5– in big margins, the BNP leaders made irresponsible comments in their usual style, he said.

“We also witnessed in the past that when election comes, BNP starts doing different ill strategies and carrying out evil efforts instead of going to the doorsteps of people,” he said.

Sensing their obvious defeat in polls due to their political failure, he said, BNP used to make confusing and misleading comments to destroy the peaceful atmosphere of election and carry out evil efforts to spoil the enthusiasm and eagerness of the voters by raising allegations repeatedly.

The people also witnessed BNP’s such traditional evil political strategy in the by-elections to Naogaon-5 and Dhaka-5 on Saturday, he added.