Nazmul XI demolished Mahmudullah XI by 131 runs in the fourth match of the tournament at Sher-e-Bangla National Cricket Stadium on Saturday to make a giant stride towards of the final of the BCB President’s Cup.

Mahmudullah XI came up with clueless batting to be wrapped up for 133 in 32.1 overs in reply of Nazmul XI’s 264-8 that helped Nazmul XI earn their second victory in three matches and both victories came up against Mahmudullah XI.

They lost their only match to Tamim XI by 42 runs while Mahmudullah XI in contrast registered four-wicket win over Tamim XI. Mushfiqur Rahim who hit a century in the previous match continued his good form with 52 to give Afif an apt support.

Irfan Shukkur was the other notable scorer with 31 ball-44 not out, which helped the side propel past 250. Afif and Mushfiqur shared 147-run for the fourth wicket stand after Nazmul XI who was sent to bat first was left to tittering 31-3. But the stand was dominated by Afif who clattered a dozen of boundaries and one six.

Mushfiqur Rahim took 16 balls to open his account and always looked bit shaky though still he found some way to reach fifty off 88 balls.

Afif meanwhile approached to his century, but only denied being trapped to run-out due to the misunderstanding between him and Mushfiqur Rahim.

Mushfiqur however couldn’t last long after the dismissal of Afif as he was dismissed by Ebadot Hossain for 52 off 92 with one just a single boundary.

The platform set by Mushfiqur and Afif was well utilized by Towhid Ridoy and Irfan Shukkur who added 70 runs. Ridoy scored 27 before being dismissed by Ebadot but Shukkur showed his big hitting prowess at the death overs to keep Nazmul XI rolling.

Thanks to his big hitting, which included four boundaries and two sixes, Nazmul XI set a daunting target for Mahmudullah XI.

Fast bowler Rubel Hossain snapped up 3-53 while Ebadot Hossain grabbed 2-60. Mahmudullah XI led by Mahmudullah Riyad was nowhere near to challenge the score as they lost wickets at regular intervals to make it tougher for themselves.

Liton Das and Nurul Hasan Sohan was the joint highest scorer for them with with run-a-ball-27 runs which included five fours and 36 ball-27 not out respectively. No batsman could reach 20 runs mark apart from them, a testament of how badly they fared. Opener Imrul Kayes began the rot, when he edged one to wicket-keeper Mushfiqur Rahim off Al-Amin Hossain bowling for 4.

Mominul Haque looked assured but he fell for unlucky 13 before left-arm spinner Nasum Ahmed came up with double blow, dismissing Liton and Mahmudul Hasan Joy (13). They in fact became six down before crossing the 100 runs mark, making it clear that the match will be one-sided one. 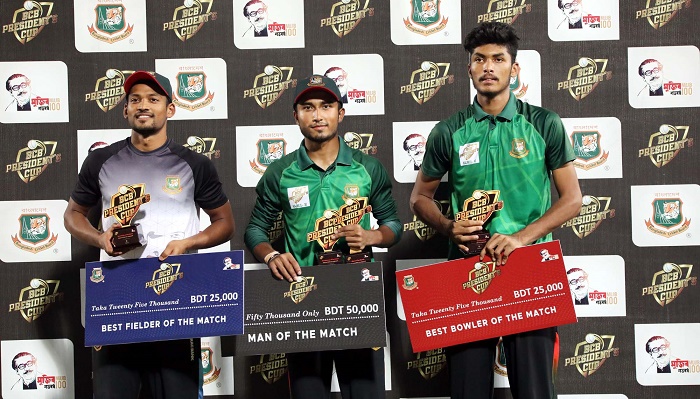