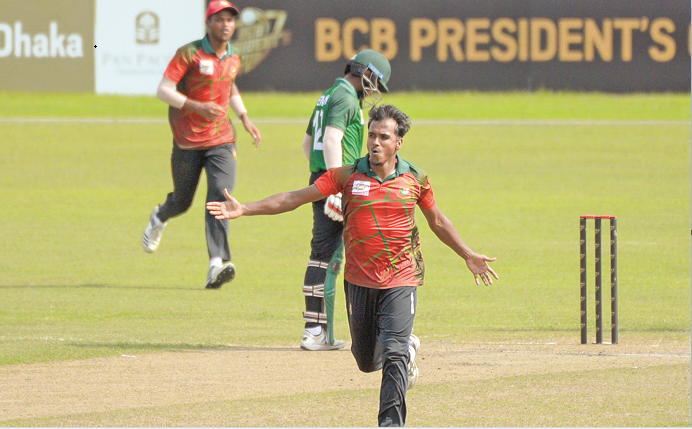 The national pace bowler, who lost a regular place in the national set-up in the recent past, came up with impressive bowling performances in successive matches to showcase his potential picking six wickets in front of the national selectors.

It seems Rubel is returning back to his former self as far as pace is concerned and what looked to be most encouraging is that he is being consistent with his line and length, a missing link in his armory.

“I think he is looking in better shape after a long time and that is the most encouraging considering he didn’t look like this for quite some time,” selector Habibul Bashar told The Daily Sun on Saturday.

“He is bowling with a lot of aggression and that was something that was missing previously and the most important thing is that he is carrying a very positive body language,” he said.

Habibul added that Rubel is reaping the benefit of playing a couple of longer version cricket in the last season as he bowled a lot of overs in the competition.

“I think he bowled a lot of overs in the longer version cricket and it surely helped him as the more you bowl the better you get,” he said.

At the halfway point of the group-stage of BCB President’s Cup pace bowlers seemed to be the dominant as the in the four games played so far in the fifty-over tournament, which began on October 11, most of them had been low score affair.

It had been a low scoring affair in the opening two games as bowlers dictated the terms while in the next two games teams managed to 200-run threshold.

In most of the batsmen have struggled to cope with the opposition pace attack and Rubel looked one of the most deadly bowlers initially with his pace coupled by in-deeper that looked to be unplayable for left-handed batsmen.