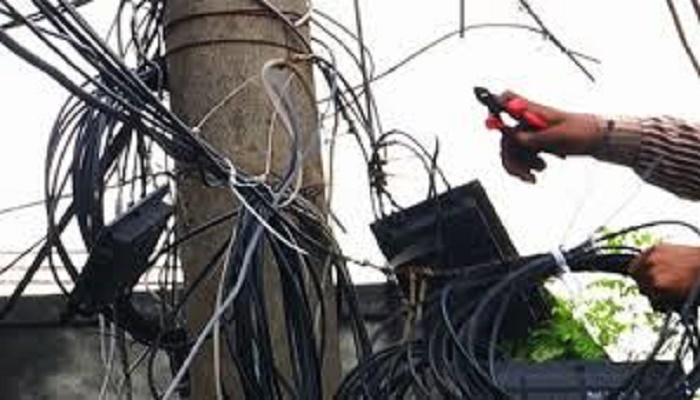 Internet service providers and cable operators have postponed their pre-announced strike to shut down internet and cable TV cable connectivity as their demands are going to be looked at by Prime Minister Sheikh Hasina.

ISPAB and COAB on Monday warned of shutting down internet connectivity and cable TV from October 18 if the overhead cable removal drive continues.

At the meeting, Post and Telecommunications Minister Mustafa Jabbar urged the leaders of the two service providers not to enforce the strike.

“I have told them that we under the leadership of Prime Minister will take a decision in this regard quickly. But I cannot say when the premier will sit in the meeting,” he said.

ISPAB president MA Hakim said the minister assured them of discussing the matter with the prime minister.

“We will wait for that meeting that may be taken place within a few days. We hope that we will get a positive result within a week,” he said.

Bangladesh could be isolated from the world if the internet service providers and cable operators enforced their pre-announced strike from Sunday by shutting down internet data connectivity and television cable at all levels, including homes, offices and banks across the country.

The economic and official activities will come to a standstill if the internet service providers and cable operators impose their strike.

A tensed situation was prevailing among the people of all walks of life over the issue of internet and cable TV shutdown.

Businesses involved in the service sectors said that a vested quarter is out to damage the sectors and tarnish the image of the government at home and abroad.

The world is relying on online communication to keep the economy afloat by tackling the Corona crisis. However, various economic and bureaucratic activities in the country are coming to a standstill due to the sudden removal of overhead cables.

Transactions in the country’s two stock markets, the central bank and even the activities of commercial banks will also be hampered by any potential internet blackout.

State Minister for Information and Communication Technology (ICT) Zunaid Ahmed Palak said “I have talked to the principal secretary to Prime Minister and private industry and investment adviser to the prime minister. I will also speak with the Mayor of Dhaka South City Corporation (DSCC).”

“I urge the leaders of ISPAB and COAB to move away from the tough position. Give us seven days. In the meantime, we will all be able to reach a logical solution together” he added.

Different professionals, businessmen, academics, bankers, students and others urged the ISPAB and COAB for stopping the disastrous decision of shutting down internet data and TV cable connectivity across the country.

At the request of the minister, SM Anwar Parvez, founder president of the Cable Operator Association of Bangladesh (COAB), first declared that their organization has postpended the decision of shutting down cable TV connection.

Later, MA Hakim, President of Internet Service Providers Association of Bangladesh (ISPAB), said: “We have also deiced to postpone the decision of shutting down internet connectivity from Sunday.”

“If more time needed to resolve the issue we will postpone the decision for one, two, three or four more days.”

Md Afzal Hossain. Secretary, Posts & Telecommunications Division, have also urged the ISPAB and COAB for moving out from the decision of shutting down internet and cable TV.

Despite the various objections and difficulties, the removal of overhead cables campaign by DSCC is still going on in the capital for the last two and a half months without arranging any alternatives.

Later, ISPAB and COAB announced a programme to shut down Internet data connectivity and TV cable from 10:00 am to 1:00pm every day from October 18, if their five-point demand is not met by October 17.

They demanded that no hanging cable can be removed until the last mile (the distance from the NTTN supply point to the user) cable is permanently fixed.

A committee comprising of ISPAB, COAB, BTRC, NTTN and City Corporation will have to arrange an on-the-spot investigation through a committee to ascertain whether the last mile has just been set up. The price of internet and cable TV services have to be fixed by the ministry at all levels including homes, offices and banks. The government needs to fix the price of NTTN to provide low-cost internet and cable TV services at the consumer level, according to the demands made by ISPAB and COAB.