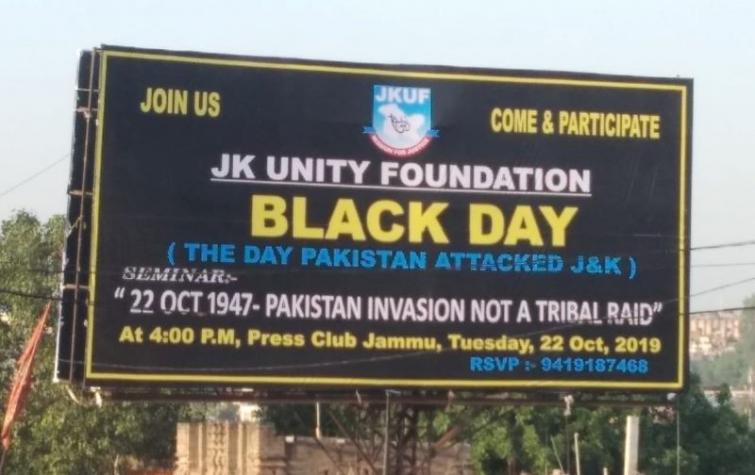 The Jammu and Kashmir Unity Foundation (JKUF) has appealed the people of Jammu and Kashmir to observe Black Day on October 22 to remember the sacrifices lakhs of Hindus, Sikhs, Muslims made to defeat the invasion of the Princely State spearheaded by the Pakistan Army in 1947 erroneously described as the tribal invasion.

In this regard, the JKUF will be holding the seventh seminar in a series titled “Pakistan’s Military Invasion not Tribal Raid of Jammu and Kashmir on October 22 at the Press Club, Jammu.

In a press statement issued here, Ajaat Jamwal, president, JKUF, along with expert speakers will dwell at length the atrocities committed by the Pakistani army on the people of Jammu and it becomes more relevant in the present times when the Government of India took a historic decision to abrogate the regressive Article 370 and integrate the Jammu and Kashmir State fully into India.

He said the designs of Pakistan had to be defeated which through terrorist regimes working in Kashmir are enforcing civil curfew and self-lock up disrupting normal life in the valley.

Jamwal said Pakistan was adopting the same strategy in 1947, 1965, 1999 i.e. pushing non-state actors, terrorists inside Jammu and Kashmir and disrupting the normal lives of the people of the state.

He urged the people of Kashmir to defy the civil curfew and also asked the state administration to foil the designs of anti-nationals and anti-peace elements in the Valley.

Jamwal said Pakistan did the entire mobilisation of tribals and the army in the name of Jihad and Pakistan Prime Minister Imran Khan’s recent speech in the United Nations has exposed the same mindset even after 72 years.