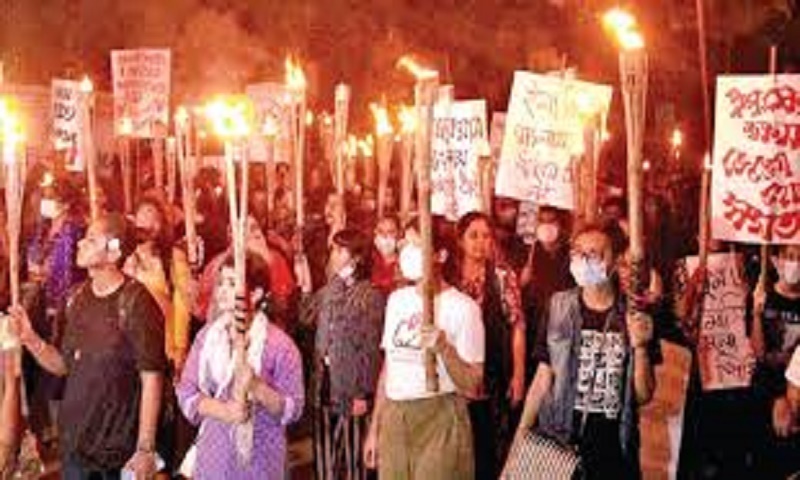 The word rape, as a taboo, is not supposed to be discussed in public. But in recent times not only has it become very public, it has drowned all other news - good or bad - in Bangladesh. Like all other countries, when Bangladesh is struggling to survive and rescue its economy amidst the covid-19 devastating pandemic, suddenly another pandemic  has struck the country--- incidents of rape.

Rape of minors, school children, housewives, elderly women, young boys in madrasas, university students, factory workers and the sort have suddenly become endemic. It has not only made lead stories in the local media, but continues to dominate most of the news of the day. Researchers are struggling to come out with a vaccine against the Covid-19 and it is expected that by the end of the year the world will hear the good news it is waiting for. But so far no vaccine has been invented to combat the crueller and more vicious pandemic known as rape, considered one of the oldest crimes against women (now also man).

Rape in Bangladesh became widespread during 1971 when the Pakistani occupation forces in the name of breeding ‘pure Pakistanis’ raped Bengali women at random. They were assisted by the goons of Jamaat-i-Islami, the Al-Badars and Razakars. A section of the mullahs supporting the atrocities and genocide committed by the Pakistani army declared the women of Bangladesh as ‘war booty’ eligible for rape and dishonour. How many women were raped is anybody’s guess, but conservative estimate puts the number between 200,000 and 400,000.

The second mass rape in this country happened in 2001, and it began immediately after the nationalparliament elections closed on 1 October. Byevening it was clear that the BNP-Jamaat alliance was heading towards achieving a clear majority in the parliament, and that was when the goons and thugs of the alliance, in some cases led by the winning candidates themselves, swooped down on the perceived supporters of the Awami League. It began first in South West Bangladesh, and the perpetrators in many cases, were actively supported by the members of the law enforcing agencies. In a day or two the atrocities spread in the districts of Bogura, Cumilla, Jashore, Khulna, Satkhira, Pirojpur,Chattogram, Tangail. Mushiganj, Narsingdi etc. Though it was the duty of the then President Justice Shahabuddin and the Chief of the Caretaker Government Justice Latifur Rahman to take necessary measures to stop the  spread of the atrocities,unfortunately both judges failed or were unwilling to take any actions against those who were on the rampage throughout the country. Ironically it was Sheikh Hasina who after winning the parliament elections in 1996 nominated Justice Shabuddin,   the first Chief of the Care Taker Government in 1991 to become the President of the country during her tenure though there were quite a few competent and experienced peoplein her party to fill the position. Justice Latifur Rahman was also made the Chief Justice during her 1996-2001 tenure. Both former Chief Justices proved to be suffering from self-imposed paralysis and amnesia when the nation needed them the most.

Many expected that once Begum Zia formed the government with her four-partyalliance, she would take punitive action against those involved in the post-election crimes.Unfortunately,that did not happen. In 2009, the Bangladesh High Court ordered a judicial investigation into the post-election violence. In 2011, the judicial commission submitted the findings of its investigation and said thatthroughout the country approximately 25 thousand people, which included 25 Ministers and members of the parliament, were involved in all sorts of atrocities, including rape, arson and violence following the 2001 parliament elections. The Commission reported that the number of rapes committed exceeded eighteen thousand. Only a few of those involved in the mayhem were tried and sentenced. The gang rape of a school girl Purnima Rani became headline not only in the national but also in the international media. After 1971, the year 2001 will be remembered as a year of fear and intimidation by the people of the country,and this would be truer for people of the religious minority. The common perception is that the religious minority always supports Awami League. Unfortunately, whenthe local media these days bring out the issue of the on-going rape pandemic, it forgets to mention the mayhem of 2001. The other day a parliament member belonging to BNP, who is also a Barrister, in a popular TV talk show proved her ignorance when she said that the Awami League can only talk about the case of Yasmin Akhter(raped and killed by the members of police force in 1995 in Dinajpur, during Begum Zia’s first tenure) and Purnima Rani forgetting the countrywide incidents and violence of post-2001 parliament election.

Rape hassuddenly become all pervasive in Bangladesh. Today girls are not safe even in the hands of family elders, teachers, mullahs and priests, in offices and work places, in places of worship or on the street. Safety of women was never so vulnerable. Those who commit crimes against women frequently use the name of the party in power, in this case Awami League, on the assumption that they will be able to hide behind their party affiliation. The present uproar began with a rape incident of a newly married young woman in a government college in Sylhet. Though the college was closed since last March due to the pandemic, surprisingly a group of students using the name of Chhatra League managed to occupy the residence allotted to the hostel superintendent ofthe college. Immediately after the incident those accused were arrested in spite of the fact that they posed as leaders of Chhatra League. Before the news of the Sylhet incident faded the incident of Begumganj of Noakhali made its appearance where a village woman was violated by a gang of young thugs of the locality. The incident hit the headline news after 32 days of occurrence only afterwhen one of the accused released a videoof the incident in the social media. Though everyone in the locality knew about the incident it seems only the local police officials were in the cold along with the local member of the parliament and other public representatives who seemed dwarfed by the hoodlums.

Because of social stigma most of the rape cases are not reported and the perpetrators go unpunished. It is a common phenomenon anywhere and everywhere. In countries like Saudi Arabia even the victims are punished. In certain tribal areas of Pakistan there were cases when a victim was stoned to death. In these countries the common norms of civilisation go begging. In Bangladesh, like in many other countries, the onus of proving that a woman has been violated remains on the victim which is not only cruel but also violates all sorts of human dignity. The legal process is slow and by the time it is completed those involved may have committed another crime somewhere else. In most cases these criminals not only hide behind some political power but are also powerful socially because in most cases of their ill-gotten wealth and muscle power.

For a longtime,demands were being made that the law to try incidents where dignity of women was violated should be changed and made more victim-friendly. After the recent incidents in Sylhet and Begumganj and quite a few other places there was a public outcry to change the law for the trial of those accused of rape or similar crimes including changes in the Law of Evidence as applied to such cases. The government took notice of the weaknesses in the law, heard the public voice and judged the reality and finally changed the law altering the punishment of life imprisonment to death penalty. In another land mark decision, the high courtalso said that medical report should not be used as conclusive evidence in a rape case.

The positive side of the present government is that whenever there is a genuine demand from the people to take any people friendly decision on any matters it usually listens to them. A decision made in 2009 to have a major international airport built in Munshiganj was scrapped when the environmentalists and the local people took a stand against it. There are quite a few similar examples where the government transformed many of its decisions, changed some criminal laws to make them more universal and victim-friendly and establish the rule of law in the country. On Thursday a tribunal has given death penalty to five men for the gang rape of a madrasa student in Tangail’s Bhuapur in 2012. This may be seen as the first implementation of the amended law.

Though many would like to think the amendment of the law will stop rape in the country, in reality it may not be so. It will however act as a deterrent against violence, rape and murder of women as it has done in the case of acid throwing incidents.

Amending the law for penalising those found guilty of rape is a move in the right direction; but to make it work, the government needs to increase the logistic support both for the investigating agencies and the courts. Special tribunals should be set up for trying similar crimes but at the same time it should be seen that the law is not misused. Bangladesh has tried the criminals of 1971 who were accused of committing crimes against humanity. The victims and the nation had to wait for long thirty-eight years and once Sheikh Hasina formed the government in 2009,went ahead with the trial in the International War Crimes Tribunal. Whether similar trials are possible for those accused of committing crimes in the 2001 post-election violence should also be explored.

Violence against women and rape should be things of the past and none accused of committing such crimes should be allowed go unpunished.

The writer is an analyst and commentator.