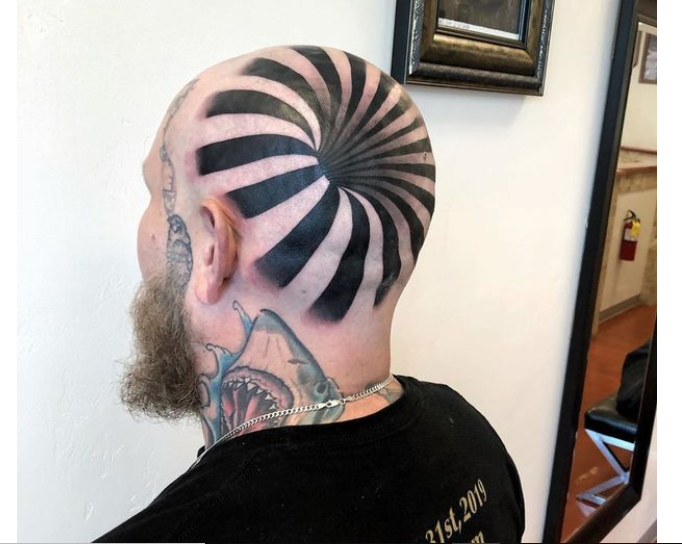 A tattoo artist has left social media users baffled after inking an incredible optical illusion tattoo on the back of his client’s head.
Tattoo artist Matt Pehrson, who works at the Zion Tattoo Company in Utah, went to new extremes in his latest project, with an "insane optical illusion" he designed for his friend Ryan.

Matt inked a series of thick lines on Ryan’s bald head diverting inwards to the back of his skull.

And with the help of some clever shading tricks, Matt managed to make it look like a massive gaping hole - and tattoo fans can't get enough.
The picture, which was originally posted on his Instagram account back in April where he has over 65,800 followers, recently received increased attention.

Matt said: "Did a crazy thing on my friend Ryan today...

"We have a lot left to finish on his dome. What do you all think of a piece like this?"
Since sharing the snap it has received more than 11,400 likes, and thousands of comments praising his work.

One said: "Literally looks like he has a hole in the back of his head holy s*** good job."

Another added: "OMG that looks fantastic!!!!"

Meanwhile, a third wrote: "This is the most insane optical illusion."
Ryan hasn’t finished his tattoo journey with Matt just yet, but with so many fans urging him to post a picture of the "finished product" we expect to see one soon.

With a vibrant shark on his neck, and another graphic design on his temple it's possible that Matt will join everything up.