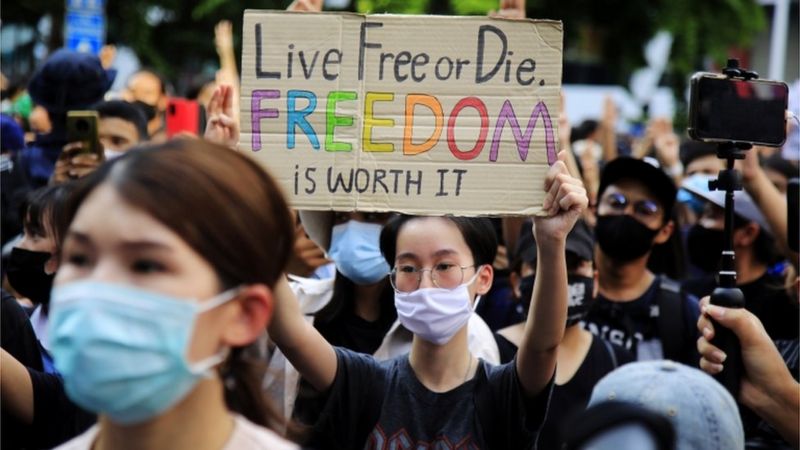 Thousands of young people in Thailand are defying the authorities by gathering in the streets and calling for change in some of the biggest pro-democracy protests the country has seen in years.

An emergency decree banning such rallies was issued by the government in an attempt to clamp down on the largely peaceful demonstrations that have also targeted the monarchy.

Despite this, the student-led democracy movement continues to march, leading to numerous arrests.

But what is behind this new movement led by young Thais?

The growing pro-democracy movement has been calling for the resignation of Prime Minister Prayuth Chan-ocha - the former army chief who seized power in a 2014 coup and was later appointed as premier after controversial elections last year.

Disillusioned by years of military rule, protesters are demanding amendments to the constitution, a new election and an end to the harassment of rights activists and state critics.

They are also calling for curbs on the king's powers - a demand that has led to unprecedented public discussion of an institution long shielded from criticism by law.

Thailand's lese-majeste law, which forbids insults to the monarchy, is among the strictest in the world. Those found guilty of breaching it face up to 15 years in jail. Critics say it is used to suppress free speech.

In an attempt to "maintain peace and order", the Thai government has issued an emergency decree banning large gatherings, limiting groups to a maximum of four people.

But protesters have since been marching against the ban, with hundreds taking to the streets of the capital Bangkok. Some have been targeting the prime minister's office, and the government has responded by deploying riot police.

Among those arrested in the latest demonstrations are three protest leaders - the human rights lawyer Anon Nampa, student activist Parit Chiwarak, widely known by his nickname "Penguin", and Panusaya Sithijirawattanakul.

Mr Anon, 36, was the first to openly break the taboo on discussing Thailand's monarchy by calling for reforms in August. Ms Panusaya became one of the most prominent faces of the protests after she delivered a 10-point manifesto urging royal reform later that month.

The two men have been arrested before. But Ms Panusaya, 21, had not been arrested until now. She was taken away in a wheelchair while giving a three-finger salute.

The three-fingered salute is a gesture taken from the Hunger Games film franchise, where it is a rousing symbol of defiance against an authoritarian state.

Unlike previous conflicts between the Red and Yellow shirts - supporters of opposing political factions in Thailand - this conflict is between older and younger generations.

How did it all start?

Thailand has a long history of political unrest and protest, but a new wave began in February, after a popular opposition political party was ordered to dissolve.

It followed elections in March last year - the first since the military seized power in 2014. For many young people and first-time voters, it was seen as a chance for change after years of military rule.

But the military had taken steps to entrench its political role, and the election saw Prayuth Chan-ocha - the military leader who led the coup - re-installed as prime minister.

The pro-democracy Future Forward Party (FFP), with its charismatic leader Thanathorn Juangroongruangkit, garnered the third-largest share of seats and was particularly popular with young, first-time voters.

But in February, a court ruled the FFP had received a loan from Thanathorn which was deemed a donation - thus making it illegal - and the party was forced to disband.

Thousands then participated in street protests. However, these were then halted by Covid-19 restrictions, technically banning the gatherings under Thailand's coronavirus state of emergency - breaking the ban carried a possible two-year prison sentence.

But things heated up again in June when a prominent pro-democracy activist went missing.

Wanchalearm Satsaksit, who had been living in Cambodia in exile since 2014, was reportedly grabbed off the street and bundled off into a vehicle.

Protesters accused the Thai state of orchestrating his kidnapping, which the police and government have denied.

In recent months they have widened to call for curbs on the powers of King Vajiralongkorn, who now spends most of his time abroad.

The protesters have challenged the king's decision to declare Crown wealth as his personal property, making him by far the wealthiest person in Thailand. It had until now been notionally held in trust for the benefit of the people.

There have also been questions over his decision to take personal command of all military units based in Bangkok - a concentration of military power in royal hands unprecedented in modern Thailand.

The movement's ability to continue to amass the large-scale rallies seen in recent months will be difficult following the crackdown on public gatherings, especially with some high profile campaigners detained outside Bangkok.

However, at least one student leader has vowed that the demonstrations will continue. In footage shared widely on social media, Ms Panusaya said the government's emergency measures should be ignored.

In recent months, small "flashmob" type protests that are easy to organise and can quickly disperse have been mobilised in smaller cities, driven by social media.

And now, people of all ages, from all parts of the country - aside from die-hard royalists - appear to agree with the student leaders that the monarchy is fair game in any overhaul of Thailand's institutions, says the BBC's Jonathan Head.

It is only a matter of time before we see more of these protests in Thailand, our correspondent adds.

Whether the demonstrations will have enough of an impact to force constitutional change remains to be seen.