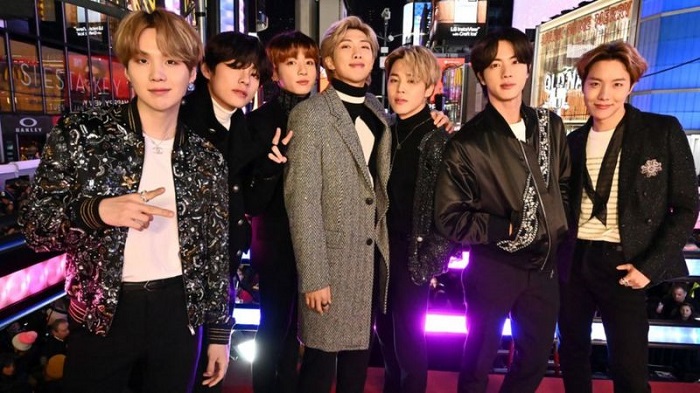 Shares in the management agency for BTS, the massively popular seven-member K-Pop group, almost doubled from their initial asking price on their debut.

It left Big Hit Entertainment with a market value of more than $8bn (£6bn).

While interest in the flotation was high, there are concerns about Big Hit's perceived over-reliance on BTS, which accounts for 88% of its revenue.

There are concerns that the group's upcoming military service could also affect profitability.

Interest in the Initial Public Offering (IPO) was high, with almost half of Big Hit's 10 million tradable shares changing hands.

It will also be worth millions to each of BTS's seven members, who were each given more than 63,000 shares.

Big Hit Entertainment has bought up several other smaller labels in the past year, but BTS is still by far their biggest money maker.

Why do investors think BTS is a good bet?

BTS is one of the world's biggest acts, and many investors feel it's a safe bet that they will continue to make money for Big Hit.

Even in the age of digital streaming, their album sales are strong, and their shows sell out within minutes.

They also have a large number of advertising partnerships for products ranging from cars to cosmetics.

They recently had their first number one hit on the US Billboard charts.

Only 20 predominantly non-English tracks have ever cracked the Billboard top 10 in its 60-year history. Three of those are from BTS.

Their first Billboard number one, Dynamite, was sung in English.

Perhaps more significant in 2020 are their statistics on digital mediums. They were the number one act on Billboard's Social Media fifty for more than 200 weeks.

In August, the single Dynamite became the first video to amass more than 100 million views in a day on YouTube.

Despite this, some are worried that Big Hit's greatest strength - BTS - is also its greatest vulnerability.

By law, all able-bodied Korean men aged between 18 and 28 must serve in the country's military for 20 months.

All seven members of BTS will be required to sign up within the next few years, although there has been some discussion of allowing them to defer.

It is not yet clear how a break for military service might affect Big Hit's profitability.