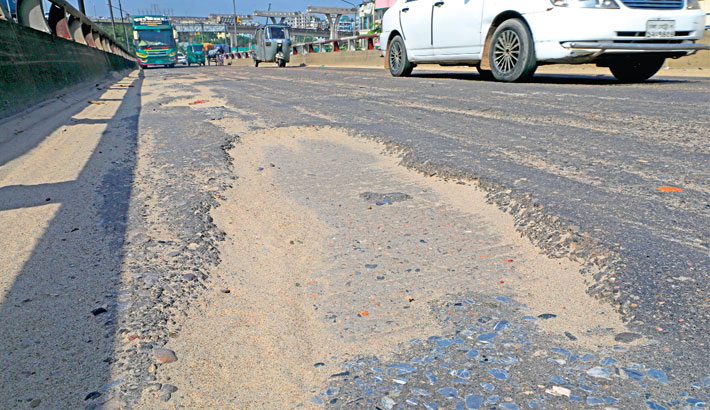 Bitumen carpeting has disappeared at many points of Kuril flyover in the capital, making the structure risky for vehicles. The photo was taken on Sunday. – Kamrul Islam Ratan

The busy Kuril flyover in the capital constructed to ease public transportation remains in dilapidated condition for a long time due to the negligence of the authorities concerned.

Pitch at most of the places on the flyover got damaged leading to many large potholes but there is no initiative to repair them.

Due to the large holes, no vehicles are able to move at their normal speed on the flyover. Besides, accidents are frequently happening. This scenario came to be evident when this correspondent made a visit to the flyover on Saturday.

Several large potholes and broken roads were seen at Khilkhet, Purbachal and Kuril points. They are getting bigger day by day due to rain water.

The flyover has Shawra, Kuril, Khilkhet and Purbachal loops. It was also seen that pitch at most places of these four loops have been damaged, and so the sand inside also moved away contributing to big holes.

A flyover in such a condition near the international airport also calls into question about the image of the country.

Some people who use this flyover regularly say there is no alternative road from Kuril to Khilkhet. That’s why all kinds of vehicles use the flyover.

Locals said due to no repairs since the construction the flyover, the strip seal expansion joints were damaged. As a result, vehicles get a big jolt as they cross each joint.

Sabbir Hossain, a resident of Nikunja 2 area, said it is very risky to ride a motorcycle on the Kuril flyover at night because of big holes on the flyover. There is a risk of an accident if you are a little careless.

He said those who commute regularly may have an idea. But if someone is new, the risk of accident is much higher for him.

Bangladesh Poribesh Andolan (BAPA) General Secretary Dr Abdul Matin said: “This is happening due to lack of proper supervision of the flyover. The management should take care of the issue.”

A DNCC official said: “Kuril flyover isn’t our responsibility. RAJUK (Rajdhani Unnayan Kartripakkha) is responsible for the maintenance of the flyover.”

Though RAJUK is responsible for looking after the flyover, it is becoming unusable day by day as the authorities have not carried out their responsibility properly, locals alleged.

On August 4, 2013, Prime Minister Sheikh Hasina inaugurated the flyover. At that time it was a scenic flyover. Having lost all its aesthetics in seven years, the flyover has now been identified as untidy to passengers.