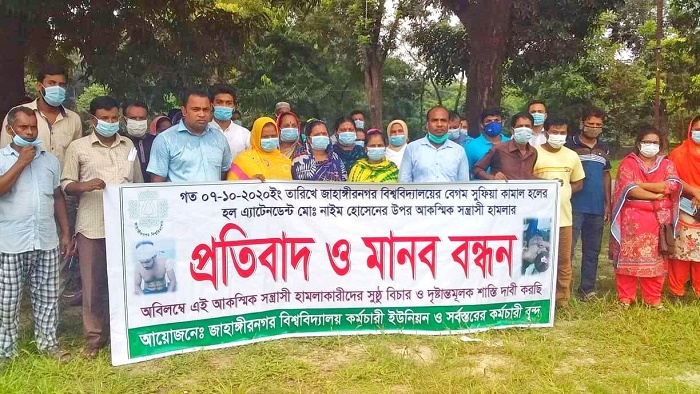 Employees of Jahangirnagar University (JU) on Sunday organised a human chain protesting the alleged attacks on a staff and urged the university authorities to take immediate action over the matter.

About 11.00 am, over 100 staffers of the university under the banner of 'JU Employee Union' formed the human chain at Central Shaheed Minar premises demanding speedy trial of the cruel attack.

They demand proper justice against Khairul Islam, general secretary of Jahangirnagar University Employees' Association for his alleged involvement in this attack.

Speaking at the programme, president of the JU Employees' Union Md Shorif Mia said, 'We strongly condemn the attack on our staff. We already sent a complaint to the university administration. They assured us of ensuring the trial within four working days. If they fail, we will go for tough movement in the next.'

Earlier on Wednesday morning, victim Md Naim Islam was allegedly beaten up twice in a day by the men of Khairul Islam. The victim was seriously injured and currently undergoing treatment at a private hospital in Manikganj.