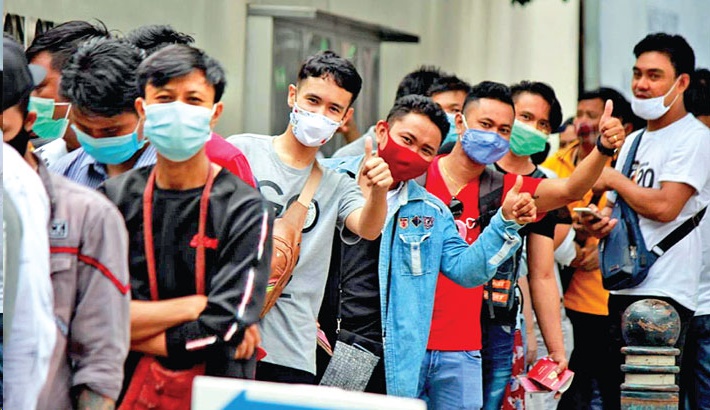 In each of the elections in the country’s recent history, Myanmar people demonstrated unity, dignity and tenacity in turning out to cast their ballots. We can expect this mental and political determination to be on full display once again when the country votes in the upcoming election on Nov. 8.

Looking at this recent history, and analysing both its abstract and tangible components, we can extrapolate certain predictions for the upcoming election.

In particular, the general elections of 1990 and 2015 provide the primary historical guide to what we can expect.

Thirty years ago, on May 27, 1990, millions of Myanmar voters showed their mettle by heading to the polling stations despite having been deprived of their electoral rights by General Ne Win’s authoritarian regime since he took power by force in 1962. It had been just two years since the military junta, dictator Ne Win’s successors, crushed a nationwide pro-democracy uprising in 1988.

On election day, there were 20.8 million eligible voters out of the country’s population of 38 million. Of them, more than 15 million went to polling stations throughout the country. Thus, voter turnout was more than 72.59 percent. Ninety-three political parties contested the first free and fair election since the country’s previous poll in 1960.

One might well wonder how voters were able to choose between so many parties, but in reality there were really only two main competing forces to choose from—the pro-democratic forces and the old guard of the generals. The former included the National League for Democracy (NLD) led by Daw Aung San Suu Kyi and other pro-democracy parties, including ethnic parties. The latter comprised the National Unity Party (NUP)—which was the successor to dictator Ne Win’s Burma Socialist Programme Party and enjoyed the support of the military regime—and the military’s proxy parties.

Showing clear-sightedness and determination, most of the 15 million voters chose pro-democracy parties and voted against the military-affiliated parties.

Let’s study the results to see which parties most people voted for: The winner was the NLD, which won 80.82 percent (392 seats out of 485); taken together, the ethnic parties were the runner-up with more than 11.75 percent (57 seats). Among them, the most successful parties were the Shan Nationalities League for Democracy (23 seats) and the Arakan League for Democracy (11 seats).

The NUP, the main party of the old establishment, won only 10 seats—or 2 percent—across the country. Its proxy parties won an additional small percentage.

So, out of 93 contesting parties, only 27 won seats, but most took just a handful each, as most votes went to the NLD and some ethnic parties. That’s how Myanmar voters chose among the many parties. Let’s look at the figures and the related chart:

It’s very clear to see the voters’ preference. We can see that voters went to the polling stations with unity, dignity and tenacity.

Next, let’s examine the 2015 election, the second inclusive election following the 1990 vote.

On Nov. 7, 2015, 24 million of 34 million eligible voters cast ballots. The voter turnout was 69 percent. This time, 91 parties contested the election. Again faced with a large number of parties, voters made their decisions along similar lines to the 1990 election held 25 years earlier. And the result was not much different.

As in 1990, the winners were the NLD and the ethnic parties, generally from the pro-democracy side. The NLD won another landslide victory, taking 77.04 percent of seats (886 out of 1,150) in all parliaments throughout the country. This time, the ethnic parties won 12.2 percent (140 seats) across the country. Among them, the two biggest winners were the Arakan National Party (45 seats) and the Shan Nationalities League for Democracy (40 seats). Other ethnic parties shared the remainder.

The Union Solidarity and Development Party formed by the ex-generals and backed by the military won 10 percent (117 seats)—more than the NUP, which was also backed by the military. Again, millions of voters went to the polls with their eyes wide open and exercised their own clear political judgment. Out of 91 parties this time, 22 won seats. Let’s look at the figures and the related chart:

Again, this shows that voters went to the polling stations with unity, dignity and tenacity, and showed clear political judgment.

Here, let me explain why I have excluded the 2010 election from this analysis. The vote that year was anything but inclusive, as major parties including the NLD and ethnic parties like the SNLD boycotted it. Observers dismissed the USDP’s landslide win, pointing to widespread rigging of advanced ballots across the country. In an indication of the scale of the boycott, only 37 parties contested the 2010 election.

Now, let’s analyse the two inclusive and mostly free elections. Though they were held 25 years apart, there are some remarkable similarities between the two elections:

Establishment party – won between 5 and 10 percent of seats

We should not assume that these results will be replicated precisely in November, as today’s political situation is far more nuanced and complex. Nonetheless, the country’s fundamental political structure still revolves around an axis designed by the former military regime, and this will remain the main factor in most voters’ choice of party, just as it was in 1990 and 2015.

Of Myanmar’s 55 million people, 38 million are eligible to vote in the upcoming election. Most observers think voter turnout will be low this time, due to the disappointment some voters feel with the performance of the NLD’s government over the past five years, as well as the second wave of Covid-19 that is currently sweeping over Myanmar.

True—voter turnout may be lower, but it is unlikely to be down by much; we have been able to feel the interest of the general public in the election since the campaign period started on Sept 8. And notably, advance voting among citizens residing overseas is likely to be high, as more than 100,000 Myanmar people have registered at 45 Myanmar embassies and consulates around the world for the November election. (In 2015, a bit over 30,000 Myanmar migrants cast votes). Since last weekend, long lines of Myanmar citizens have queued at embassies in Thailand, South Korea, Singapore and Japan to cast their advance ballots. Closer to home, the Union Election Commission is reportedly preparing options for voters, such as allowing older people to cast their ballots at home rather than having to venture out to polling stations on election day, thus reducing public concerns over Covid-19 exposure and infection, particularly for senior citizens.

Similar to the previous elections, 93 parties will contest the upcoming vote. But again, we can expect that most voters will focus on about two dozen parties that are likely to win one or more seats. And the basic political fault line will be the same one that characterised previous elections, between Myanmar’s pro-democracy forces and their adversaries.

If so, the NLD might get less than the 77.04 percent it received in 2015, and ethnic parties are likely to receive more than the combined 12.2 percent they received. Doubtless, in this political climate few people would likely be willing to stick their necks out and publicly accept the challenge of making a prediction regarding the result of the upcoming election. But let me accept that challenge and state my prediction here (though I offer no guarantees):

Even in the worst-case scenario, the NLD will not receive less than 70 percent of the vote. And it could still win as much as 80 percent, as it did in 1990. I do not see the smaller, newer parties in the pro-democracy camp winning a significant number of seats in this election.

The ethnic parties are highly likely to see their percentage of seats rise compared to the previous elections. A scenario in which the combined vote for ethnic parties reaches 20 percent of seats and the NLD drops to 70 percent is conceivable.

As for the USDP—it’s really hard to see it beating the 10 percent it won in the 2015 election. They should feel lucky if they get that much. Among its 23 allied parties, few are likely to win any seats at all.

Well, no one can see into the future—not even as far as tomorrow. These predictions are based on the results of the substantially inclusive and free elections that have been held in Myanmar. And let’s not forget that the election is still a month away—that’s a long time in politics, and many things could change between now and then.

One thing I can say with complete confidence, however, is that we will once again see millions of Myanmar voters going to the polling stations on Nov. 8, demonstrating unity, dignity and a tenacity to nurture their fledgling democracy.

Kyaw Zwa Moe is the Editor of the English edition of The Irrawaddy.