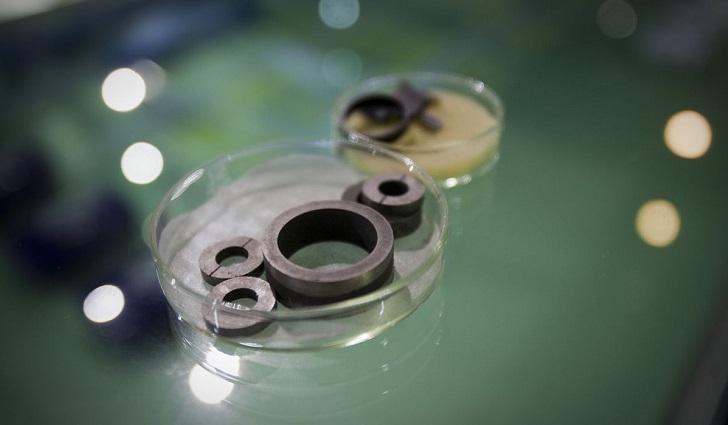 China dominates the global market in rare-earth minerals, producing 70% of the world’s exports. But this isn’t a gift of nature — it’s the result of 15 years of industrial policy. The Chinese government identified a critical economic chokehold, invested in building companies, subsidized production to underprice and ultimately destroy competition, and then constructed a monopoly.

U.S. supply chains — both military and commercial — are almost wholly dependent on China for processed rare earths for our advanced weaponry and microelectronics.

Seventeen elements comprise “rare earths,” with unrecognizable names such as ytterbium (used in TVs, computer screens and cancer drugs) and praseodymium (used in magnets and to strengthen metal for aircraft engines). They are essential to the production of high-tech electronics: rechargeable batteries, computer memory, illuminated screens, medical devices, fluorescent lighting and laser-guided missiles.

China’s approach to rare earths follows the pattern of its dominance of the steel industry, with the same destruction of Western businesses and increased brittleness in supply chains.

Rare earths are an extreme example of Western reliance on Chinese production. Despite the exclusivity conveyed by the term “rare earths,” American dependence on China for their extraction and processing is a straightforward and fixable problem. If, that is, the U.S. brings to it foresight, concerted government effort and sustained Executive Branch attention.

If the U.S. is able to solve the problems posed by Chinese domination of rare earths, it could provide a model for building greater resilience in American and Western supply chains more generally.

The fundamental challenge is economic. America’s goal should be secure supply chains, not national autarky of supply. The U.S. should do this by promoting domestic production; diversifying mineral imports away from China; cooperating with allies to insulate each other from Chinese control; developing multiple alternative supply chains; stockpiling rare earths to create shock absorbers in case of a crisis; and reducing demand by investing in alternatives.

Start with the fundamentals. Rare-earth elements exist in small quantities not easily separable from surrounding detritus. Significant known deposits exist in China, Brazil, Canada, Australia and India, as well as in the deep seabed. Sixteen of the 17 rare earths exist in the U.S. at a single west Texas site currently under development.

Their extraction and treatment is expensive and environmentally damaging, yet they are essential to $7 trillion in finished products. Wealthy countries have made licensing harder and raised other barriers, pushing the industry to China and Malaysia, where low labor costs and weak environmental enforcement make them economical.

China in particular saw an advantage in monopolizing an industry essential to advanced electronics. It restricted market access to foreign firms except in joint ventures. While China’s proportion of the world’s remaining reserves is estimated at between 25% and 45%, extraction is no longer China’s sole leverage on the market. Nearly all the rare earths mined anywhere in the world, including the U.S., are processed in China.

As a report this year from the Colorado School of Mines concluded, “China’s strength is in refining those Rare Earth oxides into metallic alloys to manufacture end-products.” Breaking China’s monopoly will require development of processing plants and supply chains outside Beijing’s control.

Japan’s experience shows how this can be done. In 2010, the Chinese government used its commercial dominance of rare earths as a national-security threat, closing off Japanese access during a maritime dispute. Japan conceded quickly, even though Japanese firms had adequate short-term stockpiles; Chinese firms broke the embargo, and markets stimulated greater supply.

The long-term effect was that Japanese firms developed technologies less reliant on rare earths in quantity. The Japanese government started to diversify supply, extending loans to Australian firms at below-market interest rates to start up rare-earth mining. In less than a decade, Japan reduced its reliance on Chinese supplies by a third.

The U.S. government has already been seeding the market with long-term investment. Rare earths were not mined at all domestically as recently as 2017. With Department of Defense support to reopen the Mountain Pass Mine in Southern California, the U.S. now provides 12% of global supply of unprocessed rare earths.

The U.S. is on the way to opening the Elk Creek Mine in Nebraska, Bear Lodge Mine in Wyoming, Round Top in Texas, a pilot processing plant in Colorado, a combined extraction and processing facility at the Bokan Mine in Alaska, and processing facilities in both Texas and California. The Energy Department has funded research competitions to develop energy products using less rare-earth minerals. Research into deep-seabed mining and into extraction from coal ash at power plants and from mining waste all show potential.

National defense requires only 5% to 10% of total U.S. rare-earth demand, but the minerals are critical to munitions, satellites, missiles and microelectronics, so the Defense Department has been using investments to subsidize domestic production under the Defense Production Act, authorized by the White House in April because of the coronavirus epidemic. The department is also providing grants to spur private investment in processing facilities in the U.S. and allied countries.

These investments will be important contributions to the solution, but rare earths will remain a serious vulnerability if the U.S. doesn’t do much more to create resilience and reduce China’s ability to suffocate access to processed rare earths. Market forces are impeding, not advancing, solutions. Coherent and sustained government actions are essential. Our recommendations include:

Encourage manufacturers to stockpile three months’ worth of supplies. Businesses may be hesitant to purchase and store stockpiles, but Japan’s experience in 2010 ought to persuade them that it’s in their interest to cushion against any attempt to disrupt production by constricting supply.

Legislate priority of supplies to the Defense Department. The Pentagon will be funding large investments to ensure profitability of commercial mining and processing. This calls for Congress to ensure that in a crisis, national defense gets first drawing rights on both domestic production and imports.

Subsidize commercial innovation to reduce foreign reliance. Companies from the U.S. and its allies are developing extraction and high-purity refinement processes that are less environmentally harmful. Government subsidies to qualifying companies of the kind the Defense Department is already offering will spur innovation that reduces over-reliance on any one approach.

Ratify the United Nations Convention on Law of the Sea. Deep-seabed mining would provide additional mineral sources, and U.S. companies are interested in pursuing development. But they need international legal protections guaranteed in the UN treaty — which the U.S. signed in 1994 but has not ratified — to provide the predictability for investment.

Create a cooperative consortium with Japan, Australia, Canada and the U.K. These countries have the essential mining deposits and processing capabilities to ensure supplies. They also have the companies with proprietary intellectual property and capacity for innovation that governments could harness to common purpose.

Allied nations could identify critical rare earths and critical industries for their defense needs; develop clear, common regulatory frameworks; and commit to produce allocations sufficient for all participants. Governments can cajole their businesses into cooperation that creates strategic depth for all the nations — or, should persuasion fail, they can regulate cooperation. The Quadrilateral Security Dialogue — which includes Australia, India, Japan and the U.S. — may also prove a useful mechanism for cooperation.

Develop a “white CFIUS” process to approve investment and commercial development. The independent Committee on Foreign Investment in the United States is exclusionary — it protects the U.S. against dangers posed by foreign investment. What’s needed is a parallel, inclusionary system — what’s known in government parlance as a “white” process — that would certify companies for involvement in rare-earth mining and refinement. This would encourage market participation; allow the sharing of information on companies that should be excluded; and create incentives for international cooperation among businesses in allied countries on exploration, mining and metallurgical technologies. Creating a white CFIUS for rare earths could be beneficial more broadly — to validate precursor chemicals for medication, for example, or to evaluate investments in cybertechnology.

Together, these steps would take advantage of China’s dwindling proportion of global reserves, and allow the U.S. and its allies to take technological leadership of the rare-earth industry, to ramp up of both extraction and processing, and to deepen cooperation among themselves.

Our recommendations would require action by the Departments of Defense, Energy, Interior, Commerce, State and the Treasury. They would require unpopular legislative action. So there can be no substitute for executive branch leadership. Breaking China’s chokehold on rare earths cannot be accomplished without a White House that ensures accountability and progress.

It is possible, with sustained emphasis, to disentangle from China the supply chains essential to U.S. national security. It isn’t simple, and it isn’t cheap. But America can afford to defend itself, and deepening cooperation with allies will provide the ability to do so.