Covid: How ill has Trump been and has he recovered? 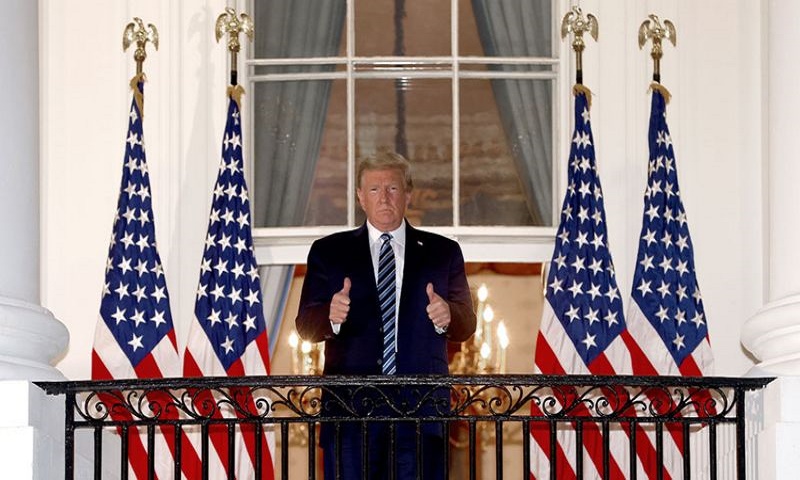 US President Donald Trump is back at the White House after a dramatic nine days in which he tested positive for coronavirus, was flown to hospital, was given experimental drugs and made an impromptu drive-by to meet supporters while still sick.

How ill has Mr Trump been and has he recovered?

We are still not sure exactly when Mr Trump tested positive

In the early hours of the morning of 2 October, Donald Trump tweeted that he had tested positive for Covid-19 the evening before.

However, since then, a number of questions have emerged and remain unanswered.

These centre on his testing regime, when he may have contracted the virus and his true health condition.

Dr Sean Conley, the president's doctor, and his medical team at the White House have repeatedly refused to say when Mr Trump last tested negative for the virus.

The silence could mean he wasn't getting tested as regularly as he should have been, and actually became infected earlier than we thought.

Further complicating matters, on Saturday 3 October Mr Conley said the president's diagnosis came "72 hours ago" - which would have been on the Wednesday - before Mr Trump attended a rally in Minnesota that night and a fundraiser in New Jersey on the Thursday. The White House later clarified that was a mistake.

There have also been contradictory briefings about the president's health, with his chief of staff at one point presenting a more downbeat assessment than the doctors.

On Thursday, doctors said Mr Trump had completed his course of treatment and could return to public engagements at the weekend.

Doctors say he has taken a number of different drugs

Mr Trump spent three nights - Friday 2 October to Monday 5 October - undergoing treatment at the Walter Reed Medical Center before being treated by a team of physicians at the White House.

His medical team said he had received intravenous antiviral drug Remdisivir, a Regeneron antibody "cocktail" and the steroid Dexamethasone - as well as other more standard supplements and medication.

--Dexamethasone is a steroid that calms the immune system, is recommended for use by the World Health Organization in "severe and critical" cases.

--The Regeneron antibody therapy that mimics and boosts immune response, but is still classed as experimental and clinical trials are ongoing.

--Remdesivir, a drug typically given to patients with severe infection, works by hindering the virus' replication in the body. Clinical trials have shown the drug can cut the duration of symptoms from 15 days down to 11.

Questions still remain about when the president first became infected and whether he could still be contagious.

The US Centers for Disease Control and Prevention (CDC) says that for most people "isolation and precautions can generally be discontinued 10 days after symptom onset and resolution of fever for at least 24 hours".

This would mean Mr Trump's 10-day isolation countdown would have begun on Saturday.

However the CDC says people with "more severe to critical illness" - which some would say include those needing hospitalisation and supplemental oxygen - are likely to "remain infectious" for up to 20 days after symptoms begin.

The second presidential debate, scheduled for 15 October, is well within this timeframe and the commission organising the event in Miami has said it would now have to take place remotely.

Mr Trump has since pulled out of the event saying he was "not going to waste my time on a virtual debate".

But speaking to Fox News late on Thursday, Mr Trump said he was feeling "really good" and intended to get back to campaigning. He is expected to host an in-person White House event on Saturday.

Such an event would be 10 days since doctors said the president began showing symptoms, but only eight days since he passed the CDC requirement of being fever free for 24 hours.

Mr Trump told Fox News he had now stopped taking most "therapeutics" but was still taking steroids and would be tested for Covid-19 again "soon".

On Monday evening, after a weekend at the Walter Reed Medical Center, Mr Trump was back at the White House.

He has appeared in defiant mood since his hospital stay, angling to work in the Oval Office rather than in the Residence - where the first family's living quarters are located.

The White House has set out new safety measures after the president's return and Chief of Staff Mark Meadows said that anyone interacting with Mr Trump had been wearing "full PPE, masks, goggles and the like".

A memo on Monday called for limited traffic on the first floor of the West Wing and at the Residence, with strict measures on protective equipment and hand sanitiser for anyone within 6ft (2m) of the president.

However some staff have expressed concern to US media that, without their knowledge, they were exposed to people who were known to be infected or were at risk of being Covid-positive.

Mr Trump himself has been busying himself partly with social media. His tweeting dropped off while he was in hospital, but regained momentum on his return to the White House.

But while Mr Trump is pushing to get back work and onto the campaign trail, among the wider US population, there is evidence that coronavirus patients - especially those in older age groups - take some time to recover from the disease.

More than a third of patients who took part in a CDC survey said they hadn't returned to work two to three weeks after first testing positive. Among those aged over 50, around 47% had not gone back.

A growing group of senior government officials and White House aides have tested positive for the virus - including First Lady Melania Trump, aide Hope Hicks and a number of Republican senators.

Mr Trump said on Thursday that "somebody got in and people got infected" but gave no more details.

Stephen Miller is the latest aide to test positive - confirming his result on Tuesday. He had been closely involved with the president before the latter fell ill, attending a meeting on 27 September to prepare for the first presidential debate in Cleveland, Ohio, and later taking flights with him on Air Force One, the New York Times reports.

Press Secretary Kayleigh McEnany and at least three other press staff have also been infected.

The Republican leader in the Senate, Mitch McConnell, 78, has not been to the White House since August because of the way it has handled Covid-19, he said.

Many of the people in Mr Trump's circle who have tested positive attended a gathering in the White House Rose Garden on 26 September - now being scrutinised as a possible "super-spreader event".

At the event, Mr Trump announced his Supreme Court pick, Judge Amy Coney Barrett, in front of a crowd of about 200 people on the White House lawn.

Along with Mr Trump and his wife, more than half a dozen other people who attended the event say they have tested positive - although it's not known where they caught the virus.

Top US virus expert and veteran health official Dr Anthony Fauci told CBS News Radio on Friday he believed the Rose Garden gathering had turned out to be a "super-spreader event" where "people were crowded together and were not wearing masks".

"The data speak for themselves," he said.