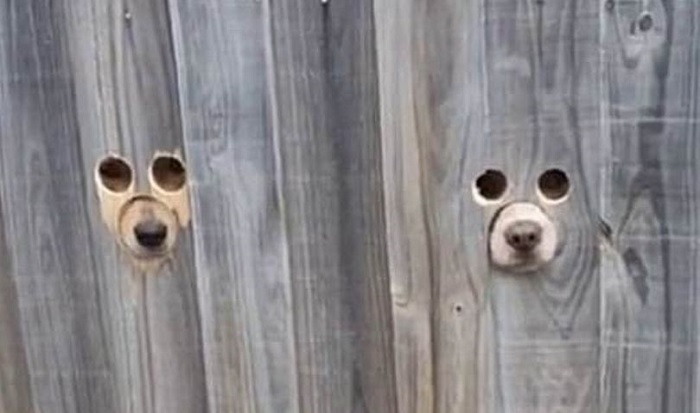 Aside from long walks and dinner time, there's nothing dogs love more than making new friends.
They get so excited when they come across a fellow pet or another person who might give them treats and cuddles.

Their ears prick up and their tail wags - it's so cute!

Well one owner knew how much her pooches enjoyed seeing new people, so she decided to create a way for them to look through the fence when they were at home, in the garden.

The unnamed woman cut six small holes in her garden fence for her two dogs - four for the eyes and two for their noses to poke through.
A video of the woman returning home and her dogs running up to look through the fence has gone viral.

The amusing clip was shared on TikTok by the user @liltroubless.

As the owner gets back to the house, one Labrador appears at the fence and is joined by a second shortly after.

It was captioned: "Mommy is home".
So far the video has been liked more than two million times and has garnered over 20,000 comments.

Many people replied to the clip to say it had inspired them to make peep holes for their own pets at home.

One person thought it was genius, writing: "Smartest thing ever. You can see but you can't bark."

Another said: "That's kind of creepy but adorable at the same time."
A third added: "Imagine you have a bad day then go home to that."

Someone else responded: "Oh my God, this is so cute."