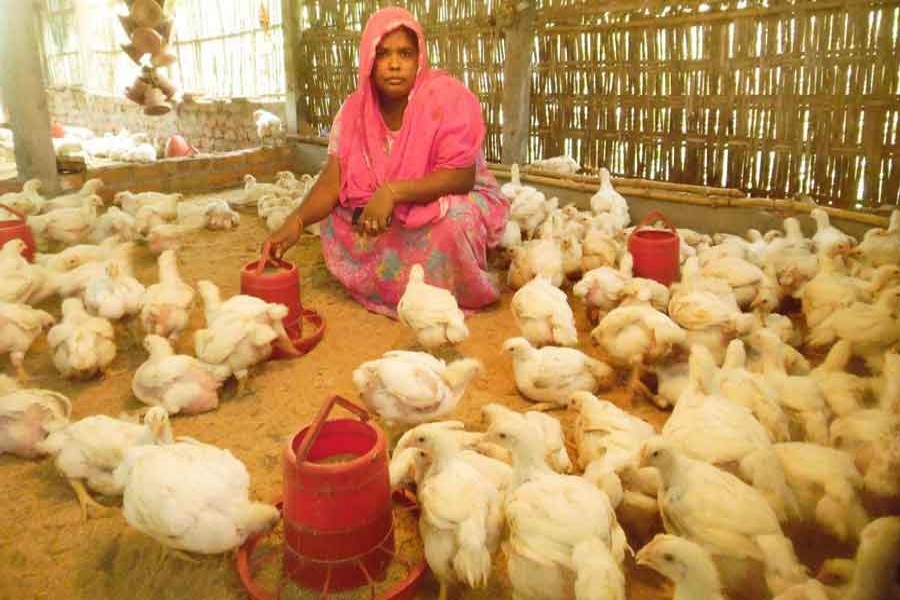 Bangladesh has been able to make remarkable progress in creating employment, reducing poverty and malnutrition over the last few decades. However, unemployment, poverty and malnutrition are still the problems in our country. Several socio-economic development activities are carried out in our country by the government, NGOs and private organisations for the further improvement of the situation. The poultry industry is playing a substantial role in achieving this socio-economic development and it is now considered as one of the vibrant sectors in creating both direct and indirect employment opportunities as well as improving food security, livelihood, nutrition, poverty alleviation and healthy lives in Bangladesh. Poultry farming is now treated as a profitable business for the farmers as the demand for poultry products is increasing day by day. However, farmers especially smallholder farmers need greater access to finance, training, innovation and technology to improve their livelihoods and production. According to Bangladesh Poultry Industries Central Committee (BPICC), the total investment in the poultry sector is about BDT 35,000 crore (USD 4.12 billion). The production of meat and eggs has increased almost one and a half times in the last five years. Private sectors, government and other stakeholders are credited for this development. It is also important that the poultry industry contributes to several of the Sustainable Development Goals (SDG) such as end poverty, zero hunger, good health and wellbeing, good jobs and economic growth, responsible consumption, climate action etc. However, the recent Covid-19 has seriously affected the entire poultry-value chain and created an unwanted mismatch between the demand and supply of poultry products. It is estimated that it resulted in about 30% drop in day-old chicks (DOC), eggs and meat production in our country. Therefore, the poultry farmers, private sectors, service providers, government and other stakeholders are adopting appropriate coping mechanisms to overcome the situation in terms of supply of inputs and sell of final products.

In the 1980s, small-scale poultry rearing was initially started by the NGOs especially BRAC in Bangladesh, and later, several private sectors entered this business in the early 1990s. Poultry farming gradually transformed from subsistence into commercial farming. The government, private sector and other stakeholders realised that poultry rearing can play significant roles in poverty alleviation, improving food and nutrition security, increasing income and livelihoods of farmers, especially for youth and women in this country. Although the commercial layer and broiler farms were commenced in the 1990s, the major expansion occurred gradually after the 2000s because of the increased demand for eggs and meats. There are about 100 breeder farms and hatcheries, 8 grandparent stock farms, 70,000 commercial layer and broiler farms, over 200 feed mills and 500 animal health companies in this country. The breeder farms produce about 700 million day-old broilers and 4.7 million day-old layer chick in 2019.

Poultry plays an important role in improving livelihood and poverty alleviation in our country. Depending on the farm size, poultry farming is the main source of family income for many; it also creates additional employment opportunities in the communities. It has created employment for over 6.0 million people most of them are youth and women. It is the 2nd largest employment sector in Bangladesh. Bill Gates, the founder of Bill & Melinda Gates Foundation stated that “If you care about the poorest, you care about agriculture (poultry)." Now we can see the reflection of this statement in the poultry industry because it has significantly contributed to increase income and improve the livelihood of thousands of peoples in our country. According to the World Bank, “Agriculture is up to four times more effective than other sectors in reducing poverty." A functional value chain has been created in the poultry industry and linked multiple actors, which include farmers, trader, processors, breeder, feed mill etc in this chain. Most of the farm is in rural areas but they sell their poultry products in the urban market, which eventually flow money from urban to rural areas. It is also helping make the rural economy much stronger.

Poultry production is the fastest-growing agricultural sub-sector, especially in developing countries like Bangladesh. It makes a substantial contribution to food security and nutrition, providing energy, protein, and essential micronutrients to humans with short production cycles and the ability to convert a wide range of agro-food by-products. The consumption of meat and eggs has been increasing in our country due to rising incomes as well as due to higher availability and affordability. BPICC reported that despite difficult challenges faced by the poultry industry, the overall production of poultry products (meat and eggs) has increased by about 10% on average in the last 5 years. The poultry meat and eggs are the cheapest sources of high-quality proteins available in our country compared to the more expensive sources like beef and fish, which also help to boost up the immune system. As per the report of WPSA- BB (2017), it was shown that the price of beef and mutton are increased by 19% and 33% respectfully whereas broiler price is increased only by 2% over the last 5 years. According to the DLS and BPICC report (2019), the country is producing approximately 46.9 million eggs and 3.1 million kg of poultry meat per day in 2019 compared to 30.1 million eggs and 2.2 million poultry meat per day in 2015. The average poultry meat consumption has significantly increased during this time, which is about 7 kg per person per year but it is still lower than the requirement. However, both production and consumption are increasing day by day. The average egg consumption per person per year is now about 103, which is almost close to the targeted recommended number of 104. DLS & BPICC (2020) stated that about 40% of animal protein comes from poultry.

Dr. A. B. M. Abdullah (Ex. Dean and Chairman Faculty of Medicine Bangabandhu Sheikh Mujib Medical University, Dhaka, Bangladesh), stated in his report of Poultry For Better Health ( WPSA-BB) that protein is necessary for: (a) strengthening and building of muscles and tissues (b) development of the brain (c) boosting energy (d) production of important enzymes and hormones (e) forming antibodies that help to prevent infection, illness and disease. Chicken meat and eggs are the main product of the poultry industry and it denotes a major part of animal protein consumed by humans. Benefits of poultry meat are (1) Low in total fat and cholesterol, thus no risk of hypertension, stroke, heart disease (2) People of any age can consume it (3) Chicken soup can be made for ill people (4) Easily digestible, rich in vitamins and minerals.  Moreover, Eggs are also rich in omega-3 fatty acids, which help to maintain brain function, especially in pregnancy and infants. According to Dr. A. B. M. Abdullah, “Eggs are for everybody and for all age”.

Considering the current Covid-19 situation, health experts have suggested that we should consume more poultry meat and eggs to boost our immunity.

There is a fundamental relationship between poultry production and nutrition. Eggs and meat are natural and affordable high-quality protein, which can be taken at any age including pregnancy. Poultry is playing an important role in improving livelihood as well as ensuring nutrition and healthy lives. We should take care of poultry to produce safe food for us. Not everyone is a farmer, yet we all must eat. Thus, we all depend on those who produce our food.

Be thankful to a farmer!!