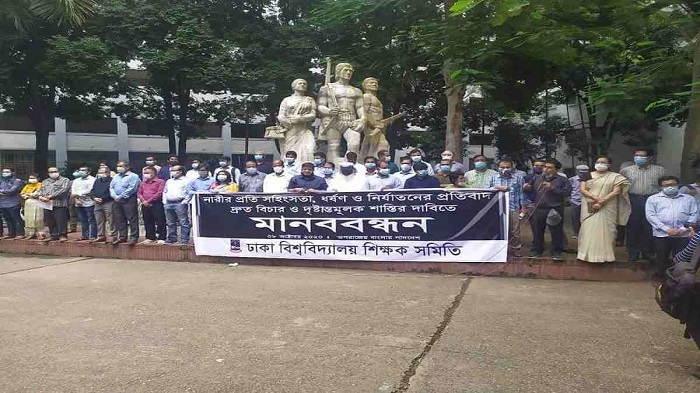 Dhaka University Teachers' Association (DUTA) on Thursday morning formed a human chain to protest against the recent incidents of violence against women, rape and torture.

They demanded speedy trial and exemplary punishment for any kind of injustice or wrongdoings against women.

The human chain was held at the base of the Aparajeyo Bangla sculpture on the university campus.

Professor Rahaman said, "Although the rapists are few in number, they are very powerful. They dare do these things because of their political connection and muscle power. This alarming increase of rape will only be reduced through a reformation of existing penal code for rape case and setting strict measures as capital punishment."

"We've mothers, sisters, and wives in our houses. Nowadays we can't even talk normally in front of them. I'd request the government to add moral education in the curriculum as well as punishing rapists. Teachers have to take responsibility for building a moral nation. We don't want to see any more rape. Let this epidemic end here," said Prof Nizamul.

Dean of Social Sciences faculty Sadeka Halim said: “Rape has become an epidemic today because of our failure to establish the rule of law in the society.”

Rape and torture will eventually stop once the rule of law is established, she pointed out.

Among others, Prof Zia Rahman of criminology, Prof Robaet Ferdous of Mass Communication and Journalism, Prof Abul Monsur, and Prof Zeenat Huda were also took part in the human chain.