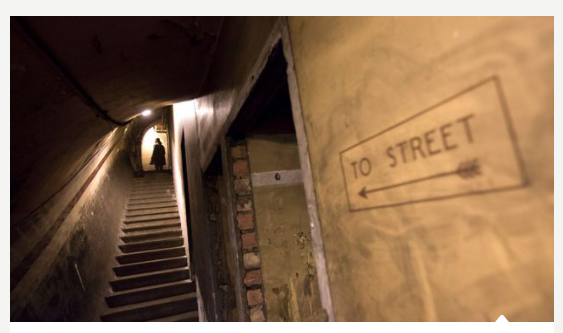 Britain’s mysterious underground tunnels have been a source of fascination for decades. Yet, until recently, authorities have remained conspicuously secretive about them.

In 2017, newly published Land Registry data revealed 4 million km of networks and telecommunications lines underneath London, many of which were secretly constructed by the Post Office, British Telecom and the Ministry of Defence.

These mysterious Cold War-era tunnel systems and underground chambers, which number in the hundreds, have been a source of fascination for decades. Yet, until recently, authorities remained conspicuously secretive about them, many owned by the Ministry of Defence and never publicly acknowledged.

The most intriguing revelation was of the Postmaster General’s secret tunnel beneath the heart of the government at 57 Whitehall. It was built to protect machinery and communications from the threat of atom bombs in the Cold War, and the bunker emerges into the basement of the Old War Office, once used by Winston Churchill. In 2014, the Raffles hotel chain bought the 54,000 sq m Grade II-listed building from the Ministry of Defence for £350 million. Named “The OWO”, the London landmark is set to open as one of the world’s highest-profile hotels in 2022.

More than 30 gears and a dozen lifts – stretching from the working-class East End to the heart of Whitehall – connect the Postmaster General’s tunnel to a secret underground network, which mostly emerges unobtrusively into government buildings and telephone exchanges.

Further, a short distance from Whitehall, an A-bomb-proof telephone exchange deep underneath High Holborn street – originally built as a deep-level government air raid shelter in the early 1940s – was a top-secret hub of more than 200 engineers from the 1960s to the ‘80s.

The two-tunnel shelter was extended by the addition of four tunnels at right angles to the originals to become the termination point of the first transatlantic telephone cable, and was spacious enough to boast a staff restaurant, tea bar, games room and licensed bar. Its bar claimed to be the deepest in the UK, located approximately 60m below street level under Chancery Lane tube station.

While there is no public access to any of these newly uncovered tunnels, there is one underground bunker in Whitehall that the public can see for themselves: the Cabinet War Rooms, opened to visitors in 1984. What no-one knew until now, though, is that it was possible to stroll approximately 6km from these underground headquarters of Churchill’s all the way east to Bethnal Green Road, E1, to emerge from an access shaft on a traffic island in the middle of a public highway.

Guy Shrubsole, who mapped this Land Registry data and revealed some of these secret tunnels on his blog Who Owns England and later in his eponymous book, went down the tunnels at High Holborn with the help of some urban explorers while doing research.

“It is an astonishing time capsule down there, probably the ‘70s in terms of decor,” he said. “It feels like an underground space station, almost, of these winding tunnels that go on and on forever but are filled with dusty equipment from when it was used for Cold War communications.”

While Shrubsole was only able to get access to one part of the tunnel systems, he said there is obviously a much bigger network. “The bits we went into were certainly abandoned, though they still had lighting on when we were in them, so it was being maintained to some extent.

There was certainly lots of water dripping off walls and rust everywhere, but the actual deeper level tunnels, I suspect, were being used, otherwise I’m not sure why they would have bricked off access to them.”

Mark Ovenden, writer, broadcaster and author of Underground Cities: Mapping the tunnels, transits and networks underneath our feet, which was released in September, writes in his book that London “possesses one of the world’s most diverse varieties of intricate, hidden and well-used passages, ducts and tubes beneath its streets.”

This is, he said, partly because during the Industrial Revolution, there came a point when London became the busiest and most modern city in the world. There was much more of a need to use the spaces below the city than there had been pretty much anywhere else.

“The city was so huge that they couldn’t smash down the centre of the already built-up area, so they had to build under it,” he said. “It just had that incredible number of people living there for such a long time during a period when technology was enabling more tunnelling to happen.”

While the UK is one of the most heavily mapped countries in the world, with the Ordnance Survey – the national mapping agency for Great Britain – having scoured every inch of the country’s land above ground, underneath, it still remains much of a mystery. For the first time, however, the agency is attempting to create a detailed picture of the UK’s subterranean landscape by mapping its underground assets.