Covid and Trump: The president's healthcare v the average American's 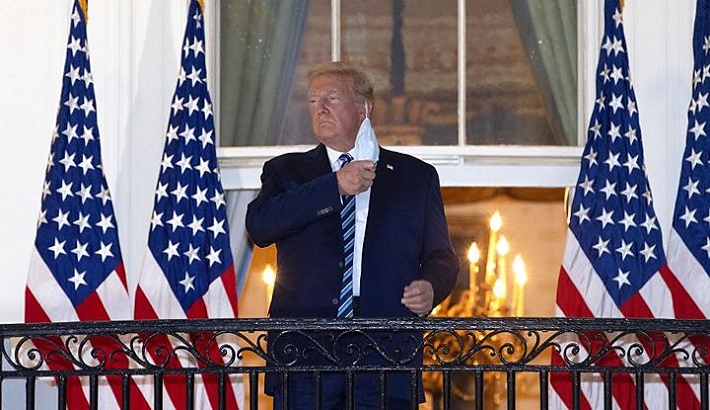 This was US President Donald Trump's advice to the public if they were worried about catching coronavirus.

He made the comments in a video message posted shortly after being discharged from hospital on Monday, having received treatment since his own diagnosis.

But, as many have pointed out, this was a man with a helicopter, a large medical team and experimental drug treatments at his disposal.

How does the picture change for Americans with Covid-19 who do not reside at the White House?

It is hard to pinpoint the "average American" amid such a diverse country and such a complicated health system, but here are some of the areas where the president received special treatment and a look at how this compares to the experiences of the wider population.

A team of doctors and a luxury suite

The president has a medical centre on site at the White House, but, as the country's commander in chief, he also had access to the Walter Reed National Military Medical Center in nearby Bethesda, Maryland.

He was transferred there swiftly after his diagnosis and stayed for three days in the hospital's presidential suite - one of six rooms reserved for high-ranking military officers and cabinet members. It included a dining room, office space and sofas for receiving visitors.

"VIP treatment is a feature of American medicine," read an article in Washington Post, looking at the president's treatment. "Major hospitals throughout the country have private spaces for celebrities, the super-rich and the influential, patients who want to be shielded from the public and just may make a large donation if they are happy with their care."

Compare this to the intensive care wards across the country, where beds have been running out at various points during the pandemic. Hospitals in Florida, Texas and Arizona have all struggled with maximum occupancy in the summer.

The Texas Medical Center in Houston, for example, prepared a Covid "war room", using various strategies to save space, such as involving reassigning staff, putting beds closer together and using regular beds for emergency use.

Fiana Tulip, from Texas, lost her mother to the disease in July. She told the BBC that her mother was scared of the overcrowded hospitals in Dallas at the time.

Case numbers have since fallen below this peak, but there are concerns they could rise again over winter.

The president was also fortunate to have the high-tech facilities of the Walter Reed hospital so close by. People living in rural parts of the US may have to travel vast distances to get medical treatment.

A study from the University of North Carolina showed that 120 rural hospitals have closed in the past decade.

"Rural places have far fewer physicians to treat the virus (20 per 10,000 versus 70 per 10,000 in metro places), and smaller hospitals with less specialised services staff, and more uninsured people (14%, compared to 7% in large metros)," says David J Peters, a professor in rural sociology at Iowa State University.

"The ability of using telemedicine to address this gap is limited, as nearly 55% of rural households do not have broadband internet access (compared to 35% in metros). Rural places are also vulnerable because they lack access to the interstate system, making transportation of patients, health providers, and supplies difficult and time consuming."

The president had no such transportation worries. He travelled to hospital in a private helicopter, Marine One, which took off from the White House lawn. The trip took 10 minutes. Even by car, it would have only taken around half an hour.

Ms Tulip said it was hard to watch the president "hop on a helicopter in his front yard" after her mother's death.

She said her mother tried to persuade family members not to call an ambulance for her, because she did not want to lumber them with insurance concerns.

Across the US many Americans fear calling an ambulance, in case their insurance does not cover the costs.

One man in rural Kansas told local radio station KCUR-FM that he was landed with a $80,000 bill for an air ambulance when he got severely ill with coronavirus complications in April. The bill was later resolved and he did not have to pay, but only after extensive wrangling between the provider and his insurer.

Such stressful exchanges - often combining lots of paperwork and phone calls - are common after a hospital stay in the US. The president will not have had these concerns.

The president was admitted to Walter Reed hospital less than 24 hours after his test result was announced. Although there had been some mixed messages over his condition, his doctor said he was experiencing "mild" symptoms.

"Patients usually only get admitted if they're potentially critical," says Anthony Almojera, a paramedic in New York City. "They are told to go home and only to come to the hospital if they develop shortness of breath."

"During the height of the pandemic, we left people home who didn't fit certain critical criteria," he adds. Though he says the pressure has since eased in the city, as case numbers have fallen.

However, Dr John Zurlo, an infectious disease specialist at the Thomas Jefferson University Hospitals in Philadelphia, says admission decisions can be a grey area.

"If you take a hypothetical 74-year-old with underlying health conditions and they have a fever, a case could be made for hospitalisation," he says. "But insurance companies scrutinise all admissions. They may come back and ask: 'Why did he need to come in for three days?' and the hospital has to justify it."

"But a low blood oxygen level is plenty of reason, even in a younger person," he adds, and the president's doctor did refer to his levels having dipped twice.

Dr Zurlo does, however, caution against using the phrase "checking-in" when referring to hospitals.

"In consultation with my doctors, I checked myself into Morristown Medical Center this afternoon," tweeted New Jersey Governor Chris Christie - a close associate of the president who has also tested positive within the last week.

Dr Zurlo says: "They are not hotels. You have to be admitted. An insurer will not pay for unnecessary hospitalisation. So unless you are ultra-rich - and even Christie is not that sort of VIP - then mere mortals cannot do this."

One such mere mortal, Juan Rios, a medical worker in New York, says he had no trouble getting admitted when his breathing deteriorated and he experienced pneumonia alongside Covid-19 earlier this year, but he felt he was being rushed out during his recovery.

"They wanted to discharge me with a low oxygen level and I didn't feel comfortable going home, so I had to get my private physician involved to stay an extra day or two at the hospital," he says.

President Trump would not have been discharged before he was ready. But what sort of treatment did he received as an in-patient?

According to his doctors, he has been treated with a number of different drugs:

-Dexamethasone, a steroid that saves lives by calming the immune system

-Remdesivir, an antiviral drug was first developed as a treatment for Ebola

-Monoclonal antibody therapy, made by the company Regeneron

People were mostly surprised by the use of the antibody therapy, as it is still classed as experimental. Clinical trials are ongoing and the president is one of only a handful of people outside those trials to undergo the treatment under what is known as "compassionate use".

Robert Wachter, professor and chair of the department of medicine at the University of California at San Francisco, told the Washington Post he was not surprised: "He is the president of the United States. For him to get the most vigorous therapies . . . even if we have not yet reached the point where there is enough evidence to make it available to everyone in the country, doesn't seem off to me."

But would these same treatments be offered to regular patients?

Dexamethasone is "cheap and available", according to Dr Zurlo. "We also have a lot of Remdesivir in our hospital. We were given a big free supply from the company and we still have plenty. I imagine a lot of hospitals have it now, too, at least in urban areas.... And if you are sick enough to be hospitalised, you will qualify for all these treatments."

The exception, he says, is the particular antibody treatment that Mr Trump underwent, which is still not available to the masses. Another therapy - convalescent plasma treatment - may be tried instead, he says.

The best of the best

Many of his supporters said the speech was inspiring.

His optimism does have some foundation in that medical research into Covid-19 is so much more advanced now than it was at the start of the pandemic, but critics still feel the comments were tone-deaf and failed to show empathy towards those who have had a much harder time with the disease.

"While it may be correct to say the United States has some of the best healthcare services in the world, it is not accessible to all Americans equally," says Professor Peters. "The poor, minorities and rural Americans have less access to healthcare and suffer from worse health outcomes."

Mr Rios, who is now back to work after his own stint in hospital, is also critical: "It is really easy for him to say that while receiving the best treatment in the world. He had everything at his disposal. I don't think he would like getting the basic treatment, like I did and many others did too."