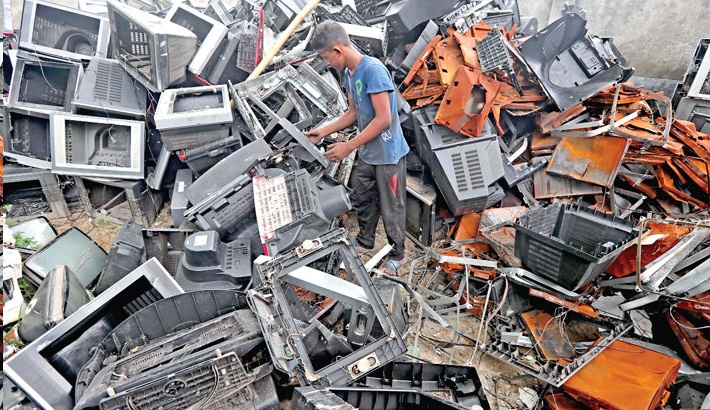 The volume of electronic waste is rising alarmingly in line with the increased penetration of electronic marvels while the country is yet to develop a prudent policy to handle the e-scrap, according to policy experts and analysts.

The Department of Environment formulated a draft policy on e-waste management on February this year, but the draft guideline has so far not seen the light due to what the officials said bureaucratic red tape.

The annual production of e-waste now stands at 5.45 million tons, maintaining a 30-percent growth year-on-year, according to a research organisation ESDO.

E-waste refer to the electronic products that are unwanted, not working, and that have had their lifetime over. Computers, televisions, stereos, copiers, fax machines as well as a whole lot of other such devices fall under the rubric of electronic marvels used every day.

E-waste is an aftermath of increased penetration of digital devices including mobile phones and computers in the country. In most cases, manufacturers or importers have no engagement in e-waste management, however, they use expired parts in different new electronic products.

The annual market size of smart phone in Bangladesh is around 30 million where locally manufactured devices account for 41 percent of the volume, according to a research firm Light Castle.

Telecommunications Minister Mustafa Jabbar mentioned that a number of firms have come up for e-waste management, and are working on their own without a definite policy guideline.

He also suggested introducing special campaign to inspire people to exchange old devices or to set up a special corner in market to dump e-waste specially.

Environment and Social Development Organisation (ESDO) has been working for a long time in research-based advocacy on e-waste management for saving people and other animals from its toxicity.

“E-waste is hazardous for nervous system for human health as well as for environment. We are living with toxicity of e-waste from electronic devices around us. Toxic elements from unused devices emit radiation regularly which creates negative impact on health as well as on environment,” ESDO Secretary General Dr Shahriar Hossain.

“We should focus on special management of e-waste to safe the society.”

He also suggested using separate bins to throw the e-scrap into and introducing a special dismantling process to save the nature from the curse of toxicity coming out of the handy electronic objects regularly.