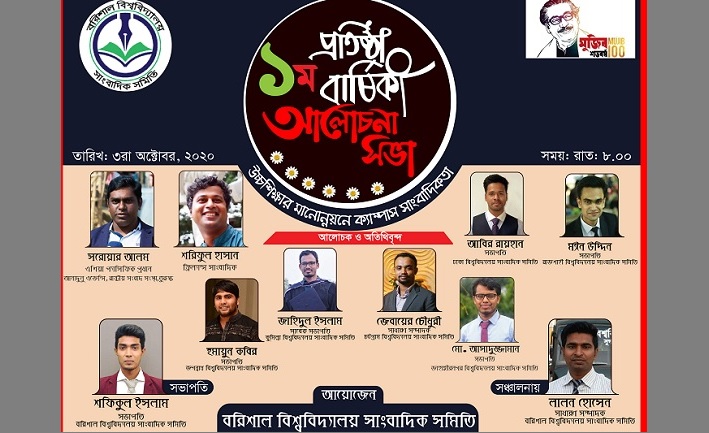 A cake was cut on the occasion  by Street Children. During this time they were given lunch and encouraged to hygiene rules to prevent corona virus infection. Shafiqul Islam the president of Barisal University Journalists' Association and others leaders and members of the association were also present at the ceremony.

On the occasion of the first founding anniversary, a virtual discussion meeting titled "Campus Journalism in Improving the Quality of Higher Education" has been organized at 8 pm on Saturday.

Sarwar Alam said, Campus journalism has empowered the youth to hold the pen with a strong hand against injustice in the path of truth and justice.  The way their pens are fighting against the irregularities and corruption of the campus makes us optimistic about the future of journalism in Bangladesh.

Shariful Hasan Said, The university will move forward if every recruitment, tender, clash of student organizations, whatever it is, is neutraly covered through journalism. University journalists have an important role to play in this regard.

On 3rd October 2019, Barisal University Journalists Association (BUJA) started its journey. The organization has already gained the confidence of the students by providing objective news.