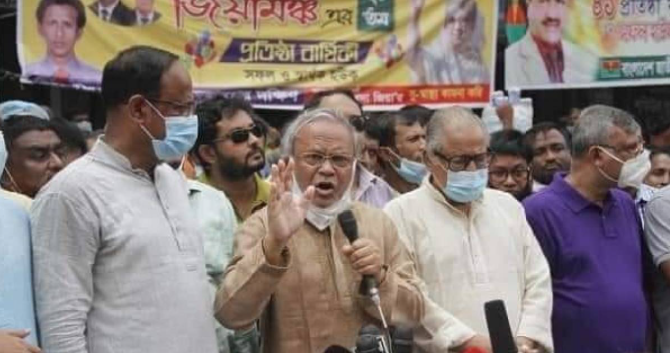 BNP senior leader Nazrul Islam Khan on Saturday alleged that people are getting scared of politics due to ‘wrongdoings’ and ‘spiting venom’ by the government in the name of politics.

"Foul play, dirty behaviour and spiting venom in the name of politics only frighten people about politics. The government is doing this to mislead people,” he said.

Nazrul made the remarks while speaking at a human-chain programme arranged by Jatiyatabadi Jubo Dal in front of BNP’s Nayapaltan central office protesting a ‘false propaganda’ against party founder Ziaur Rahman.

He said the ruling party top leaders have long been conducting a ‘false’ campaign and spreading ‘lies’ against Zia and his family members, but people do not believe them. “So, there’s no point of making such evil efforts to malign Zia and his family.”

Nazrul, a BNP standing committee member, voiced deep concern over the growing incidents of rape and violence against women.

Referring to the statistics of Ain O Salish Kendra, he said over a thousand women were subjected to rape over the last nine months.

“This government neither can protect our mothers and sisters from rape nor can save the country’s resources from plundering. The share market, the Bangladesh Bank and other banks are looted while thousands of crores of taka are being siphoned off to Swiss banks. Women and children are being abused and people’s bodies are lying on the roads.  This’s the scenario of the country,” the BNP leader bemoaned.

He said the ruling party leaders should be ashamed of the ‘misdeeds’ done by their fellow party men. “Rein in your party men first, and apologise to people.”

Nazrul urged the government to stop the ‘false campaign’ involving Zia with ‘Indemnity Ordinance’ since he had no link with it.

He said the government now made a drama styled ‘Indemnity by some infamous people ‘distorting history, to undermine Zia with a smear campaign against him.

The BNP leader said the leaders of ruling party student Bangladesh Chhatra League (BCL) are indulging in the incidents of rape and harassment of women across the county.

After the MC College one, he said another incident of rape happed at Uttara in the capital on Friday, also by a BCL leader. “The stigma is all around, people are giggling all around.  To hide all this, they made a cheap drama by some people subservient to them.”