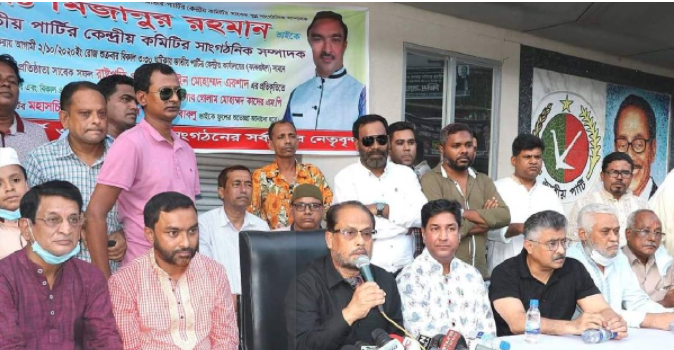 Voicing deep worry over the price hike of essentials, Jatiya Party Chairman GM Quader on Saturday said the market is not out of the government’s control.

“Only a handful of traders involved in imports are controlling the market price while the small traders are facing the wrath of the ministry for the extra price. The market is now out of control,” he said.

Expressing anger, he said farmers do not get fair prices for their agricultural produce during the season but those food items are sold at prices several times higher than the due rates due to the mismanagement of the government. “It only inflicts sufferings on common people.”

GM Quader came up with the remarks while speaking at a programme at Jatiya Party Chairman’s Banani office. Several hundred leaders and activists of different parties joined Jatiya Swechchasebak Party at the programme.

He said the rawhides of the sacrificial animals were sold at throwaway prices for a few years while many people buried those having failed to sell those. “The national resource leather has been wasted as the government has not been able to increase the number of buyers.”

The Jatiya Party chairman also accused the government of ‘deliberately’ ruining the leather industry, affecting the orphans and small traders.

Stating that the country's economic situation may not return to normal anytime soon due to the coronavirus, he said the 18 crore people of the country must work together to overcome the fallouts of the pandemic.

Among the three major parties in the country, GM Quader said Jatiya Party is a very promising political force. “Awami League earned praise for implementing big development projects like Padma Bridge and Metro Rail staying in power for a long time. But the party is also being criticised for the growing incidents of murder, enforced disappearance, rape, extortion and tender manipulation. On the other hand, BNP is in an uncertain political situation for various reasons. Many are skeptical about the future of BNP.”

GM Quader said they want to take Jatiya Party forward by turning it into a brand for building a society based on justice.