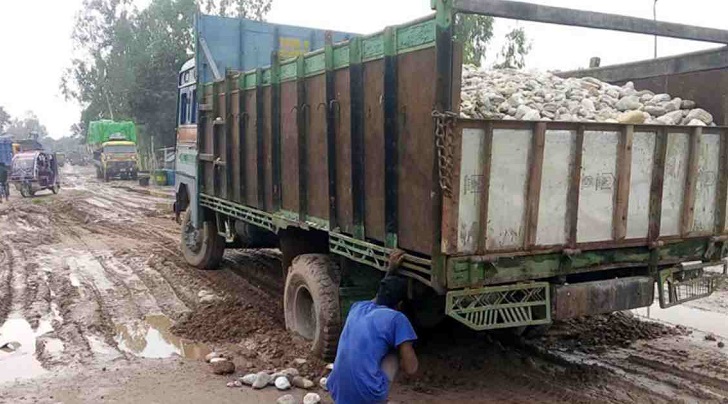 Full of pits and potholes, the approach road to Sonahat Land Port in Kurigram's Bhurungamari upazila has started to resemble the Moon's surface.

Local traders, who are the worst hit, say their repeated complaints to authorities about the poor condition of the 3.43km stretch from Sonahat Bridge to the port, which deteriorates during monsoon, have only fallen on deaf ears.

As the 18th land port of the country, the Sonahat facility was unveiled in 2016, ushering in a ray of hope that the zone would be another trade hub of the country. But four years on, authorities have not been able to construct a smooth approach road — a basic civic amenity.

Traders say exports and imports have been falling by the day as only a few freight trucks enter Bangladesh from India through the port. And those which enter often get stuck in potholes and pits.

UNB has learnt that the Roads and Highways Department started road construction work on December 5 last year, being financed by the Asian Development Bank.

A whopping Tk 44.62 crore was allocated for the construction of the 43km road from Kurigram to the land port. Local construction farm Mojahar Enterprise was assigned for the road construction work. But nothing has changed on the ground.

Local traders say around 200 Indian trucks used to enter Bangladesh through the land port area daily earlier. “But, these days, only 20 to 30 trucks come from India due to the dilapidated condition of the road,” a trader said.

Rajab Ali, a shopkeeper in the area, vented out his anger. "My business is suffering as people refrain from using the road due to its poor condition. Road construction is taking place but at a snail's pace," he said.

Indian truck drivers also expressed anger over the poor state of the road.

Abul Hossain, an Indian driver, said goods laden trucks frequently suffer breakdown on the road. “That is why we refrain from entering Bangladesh through this road,” he added.

Abdur Razzaque, general secretary of the Importers and Exporters Association, blamed negligence on part of the contractor and the authorities in getting a road done in four years.

“Although we’ve repeatedly informed the authorities about the issue, no concrete steps have been taken yet. As a result, the traders are badly affected and the government is also losing revenue,” he said.

When contacted, Ali Nurain, executive engineer of the Roads and Highways Department of Kurigram, said construction work will start soon.

Despite repeated attempts, the construction firm could not be reached.