Tigers go back to competitive cricket 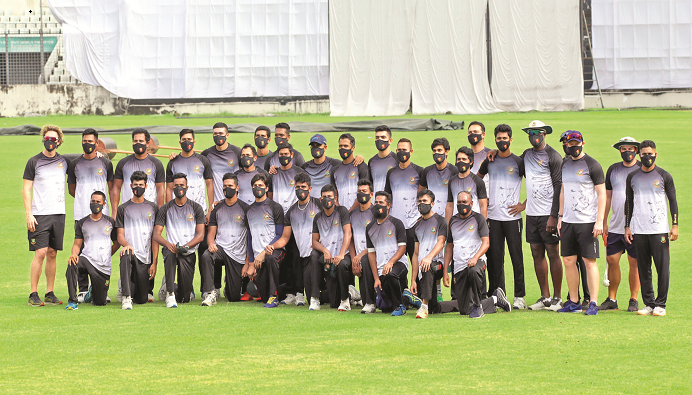 Bangladesh cricketers returned to skill training camp after the three-day break at the Sher-e-Bangla National Cricket Stadium on Thursday.

Cricketers looked in a jolly mood as they started their skill camp despite the fact there is no international involvement at the moment.

All the cricketers were tested negative in the latest corona test before going back to the bio- bubble environment by getting back into the hotel.

The two two-day matches will take place in the coming week as Bangladesh Cricket Board (BCB) is desperately looking to give cricketers some taste of competitive cricket.

BCB was desperately looking to make a road-map to make a return to competitive cricket and was eyeing to play a Test series against Sri Lanka that was postponed recently due to tourist reluctance to abide 14-day quarantine there.

The 27-member Bangladesh squad re-entered into the bio-bubble environment on October 1 that began on September 20 after BCB announced a three-day family break of the cricketers in order to keep refresh them mentally at the expense of breaking the bio-bubble.

BCB formed a 27-member preliminary camp for a one-week residential camp ahead of their Sri Lanka tour that was postponed later but kept the squad intact and the two-day match will be played by dividing the cricketers into two groups.

BCB already hired two floors to keep the cricketers and the supporting staff for the tour while the board officials insisted that the hotel staffs that are expected to work with the team will be living in a separate dormitory and they have completed the test of the drivers expected to carry the cricketers from hotel to the ground.

National cricketers on request of not to be named told The Daily Sun that it’s a big challenge to live in the bio-bubble environment.

“Earlier we went on for longer tour and we have a vast amount of experience to pass our time without family but this time the matter is that there is no way to get close with family despite having stayed in the country,” a cricketer told The Daily Sun recently.

“There is nothing to do. And that’s the reality,” he said.
Players will have to come and go at the Sher-e-Bangla National Cricket Stadium (SBNCS) in Mirpur from the hotel while they can’t go out in the gap like the past occasions to meet with their family members during the time frame they are staying in the hotel ahead of the tour comprised with three-match Test series.

Apart from cricketer’s team officials who are expected to act as umpires entered the bio-bubble of BCB as they reported to academy to have their corona tests.

While announcing the postponement of Sri Lanka series, BCB president Nazmul Hassan said this week that the board is working hard to bring cricket back to the field resuming the domestic season.

He also hinted that instead of resuming the paused event, they might host a new one only for this year, and a T20 league might be the first step towards bringing back the game after the Covid-19 hiatus.

The last competitive cricket game held in Bangladesh was in the Dhaka Premier Division Cricket Leauge in March. Since then, all the cricketing activities were on hold until some of the national players started an individual training programme before the Eid-ul-Azha vacation.

Tigers might not play any international game this year. Their first away tour is now set against New Zealand which will take place in March 2021, as it was confirmed by both New Zealand and Bangladesh recently.