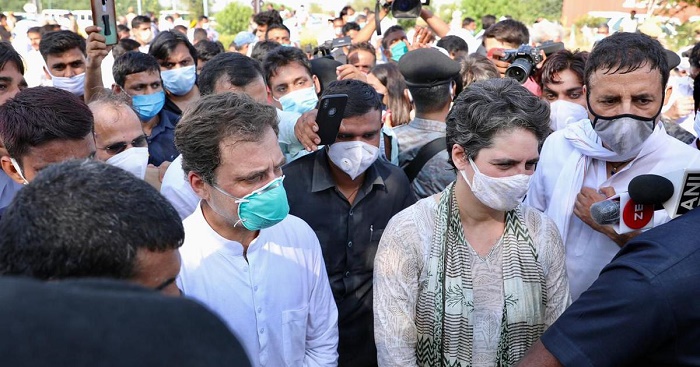 Congress leader Rahul Gandhi and his sister Priyanka Gandhi Vadra have been released from detention on Thursday.

The two were detained on their way to Hathras after Rahul Gandhi accused the Uttar Pradesh police of pushing him to the ground and resorting to lathi-charge. His sister, Priyanka Gandhi Vadra, was also accompanying him to meet the family of the woman who was gang-raped.

The two leaders were marching on the highway between Delhi and Uttar Pradesh after their convoy was stopped on its way to Hathras, reports NDTV.

The crime has provoked nationwide outrage. The Gandhis sat on the road with hundreds of supporters after the Uttar Pradesh police refused to let them continue.

Ahead of the Congress leaders' visit, the UP administration enforced a ban on large gatherings and put up barricades at the borders citing the coronavirus.

Even as Congress workers blocked roads and chanted slogans, the Gandhis' SUV crossed the border, but their convoy was stopped at Greater Noida, at a point that is about 142 km to Hathras. The Gandhis then got off the vehicle and started walking with scores of Congress workers.

The young woman died on Tuesday at a hospital in Delhi. She had suffered multiple fractures, paralysis and had been left struggling to breathe by a neck injury when she was assaulted by four upper caste men from her village on September 14. The police said there was a gash in her tongue because she had bitten it when the men were trying to strangle her.