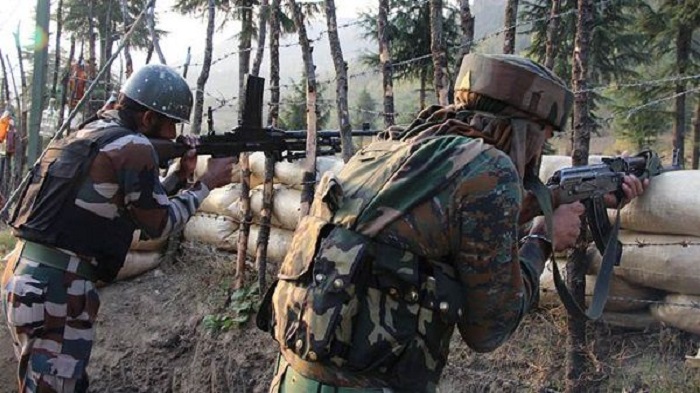 Three soldiers of the Indian army were killed and five others injured in separate incidents during heavy shelling by Pakistan along the Line of Control in Jammu and Kashmir, reports NDTV.

The army said a fitting reply is being given to Pakistan, which is using mortars to target Indian positions. There is no clarity on whether the Pakistan army has suffered any casualty.

The unprovoked ceasefire violation started on Wednesday night with firing of small arms and intense shelling of mortars in the Mankote and Krishna Ghati sectors, a defense spokesman said.

The two soldiers were killed and four others were injured when Pakistan army started firing mortars in Nowgam sector of Kupwara district in North Kashmir this morning. The injured persons are being evacuated, the spokesman said.

Earlier, a soldier was killed in Poonch sector and another was injured after Pakistan army violated ceasefire and started heavy firing on Indian positions.

Over the last five days, Pakistan has been targeting villages in Poonch in which some livestock were injured on Tuesday.

On September 5, an army personnel was killed and two others, including an officer, were injured as Pakistani troops used heavy fire and mortar shells along the Line of Control in the Sunderbani sector of Rajouri district, officials said.

On September 2, a JCO (Junior Commissioned Officer) was killed in yet another ceasefire violation by the Pakistan Army in the Keri sector of Rajouri.

Over the last eight months, more than 3,000 ceasefire violations by Pakistan have been reported, which is highest in the last 17 years. In September alone, the Pakistan Army violated ceasefire 47 times.

In 2003, India and Pakistan had agreed on ceasefire along the Line Of Control.