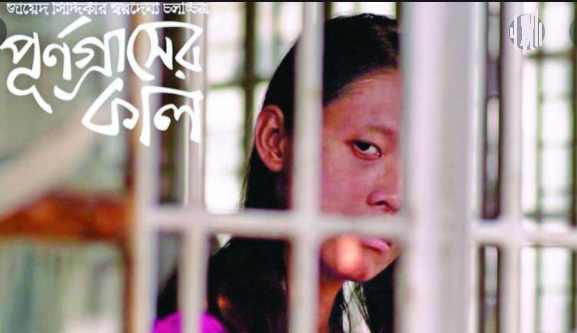 Zayed Siddiki’s ‘Purnograsher Kal’ is scheduled to have its world premiere at 7pm on Thursday at country’s first pay-per-view movie OTT platform Lagvelki.

Co-written by Helal Mohiuddin and Zayed Siddiki, the short-film portrays allegoric defeat of terrorism and fundamentalism to the spirit, conscience and knowledge of novelty.

It shows how youths are getting dragged into terrorism, their gradual attraction towards militancy and terrorist activities to fall for fake heroism shattering their future, according to the director.

The film also visualises the psychological instability of an artist because of global terrorism, war and his confrontation with militants. “The film portrays that the young people are driven into militancy for the benefits of a few who spread fundamentalism, which is nothing but miserable for humanity and peace,” Zayed said.

Veteran actor Jayanta Chattopadhyay is the protagonist. He is playing the character of a progressive writer and painter who carries a strong message against fundamentalism and militancy.

Zayed Siddiki is an aspiring Bangladeshi new generation filmmaker based in Dhaka. He obtained an MA in Television and Film Studies from the University of Dhaka, and has been writing-directing short fiction and documentaries for over a decade.

He is currently making his first feature film ‘Silence of the Words’ which is an adaptation of a story from Hasan Azizul Haque.

‘Colourkite, ‘Lives Behind Garbage’, ‘Dream Lithe’, ‘Disappearing Artisans’ are some of his past films which have been screened, invited, competed and awarded in several national and international film festivals.

‘Purnograsher Kal’ is presented by Cinemotion and Baraka Power and produced by Homo Reflector Production. Anyone can view the film at www.lagvelki.com for a digital payment of Tk 100 and the film will be available for the next six months.