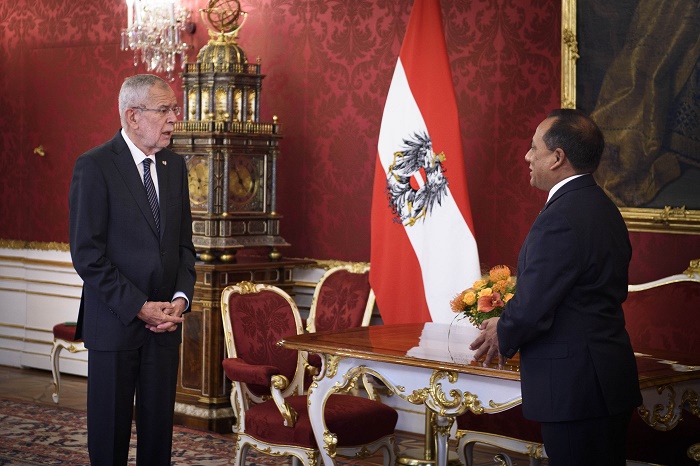 Federal President of Austria Alexander Van der Bellen has expressed optimism that the bilateral relations between Austria and Bangladesh will advance further in the days to come.

While fondly recalling meeting with Prime Minister Sheikh Hasina in Vienna in 2017 during her visit to Austria, the Austrian President conveyed his warm greetings to the President and the Prime Minister of Bangladesh.

The Austrian President made the remarks during presentation of credentials by the newly appointed Bangladesh Ambassador Muhammad Abdul Muhith in a ceremony held at the Hofburg Palace, the Office of the President, in Vienna on Thursday.

Ambassador Muhith was accorded a Guard-of-Honour by a smartly tuned contingent of the armed forces of Austria. Deputy Chief of the Mission Rahat Bin Zaman accompanied the Ambassador to the ceremony.

The presentation of credentials was followed by a meeting with the Federal President Van der Bellen, according to a message received from the Bangladesh Embassy in Vienna.

The President and Bangladesh envoy discussed key issues of bilateral interest and engagements.

The Rohingya issue was also discussed during the meeting. While enquired, Ambassador Muhith informed the Federal President that Bangladesh is hosting 1.1 million Rohingya at present and urged for more effective role by the international community for a solution to the crisis.

Ambassador Muhith informed the President about the Visions 2021 & 2041 of Prime Minister Sheikh Hasina, Bangladesh’s scheduled graduation to the developing country status in 2024, and the country’s endeavours to achieve SDGs 2030 while facing a planetary emergency of climate change, which has been compounded by lack of solid global actions and now by COVID-19.

Voicing deep appreciation for the role played by Austria and also by EU in connection with the virtual launching of  ‘Leaders’ Pledge for Nature’ to prioritising a greener post-COVID recovery by the European Union, Muhith expressed Bangladesh’s readiness to engage deeply with Austria and the EU under the newly launched initiative.

The initiative launch in New York during the UN General Assembly on September 28 and Bangladesh Prime Minister is also a signatory ‘Leaders’ Pledge for Nature’, which has put conservation of ecosystem and climate at the heart of post-COVID recovery plans.

The Rohingya issue was also discussed during the meeting. While enquired, Ambassador Muhith informed the Federal President that Bangladesh is hosting 1.1 million Rohingya at present and urged for more effective role by the international community for a solution to the crisis.

On behalf of the President of Bangladesh, Ambassador Muhith invited the Federal President of Austria to visit Bangladesh at a mutually convenient time in not too distant future.