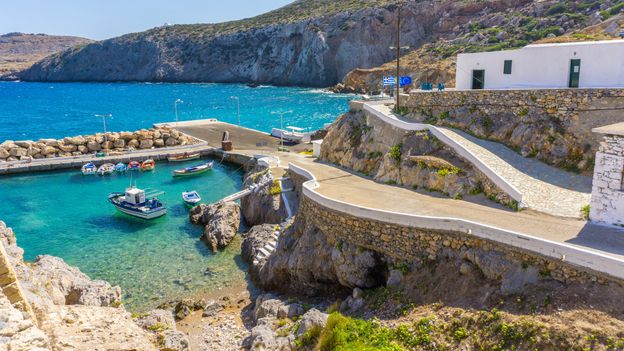 From the ship, the island of Antikythera looked like a handful of withered and desiccated boulders flung into the Aegean. “Prepare to get lost in 180-degree blue,” said Maria Tsichla as we approached the harbour at about 04:30 on a June morning. “Oh, and always make sure your room’s door is closed, as the goats here love to enter into houses uninvited.”

Tsichla was travelling to this remote spot for research reasons. She is one of the climate scientists of the Panhellenic Geophysical observatory of Antikythera (Pangea). Named after the ancient supercontinent, the ambitious project, which has been operating since 2017, is inviting scientists from across the globe to this rocky Greek isle to form a global scientific community with the aim of fighting climate change.

As we moored in Potamos, the small circular bay that functions as the island’s port, I could see people crowded together in front of a jumble of white houses. “This is the village of Potamos, where most of the locals live,” said Eleni Marinou, another climate scientist and member of Pangea. “The rest of the island is uninhabited.”

“All these people have come to greet new arrivals at 04:30 in the morning?” I asked her.

“Every ship’s arrival is a mini fiesta here,” she replied.

After all, only 22 people live on Antikythera year-round. But this rural landscape might soon change, with Pangea’s grand plan of turning the island into a worldwide climate superstation.

Situated between Crete and Kythera at a point where three seas, the Aegean, the Ionian and the Cretan, converge, Antikythera holds a unique geostrategic position. “Antikythera is located at the crossroads of air masses from all continents,” said Vassilis Amiridis, climate scientist and director of research at the National Observatory of Athens (NOA), who leads the scientific committee of Pangea. This means that large parcels of air from all continents, with the ability to take on the temperature and moisture properties of their respective place of origin, meet exactly above Antikythera, making the island what Amiridis describes as a “meteorological melting pot”. In addition, there is no light pollution, so scientists can observe the skies clearly and easily.

Here, Amiridis said, you can find dust from the Sahara, tephra from Mount Etna and cinder from Canadian wildfires. On 28 August 2018, for example, Pangea’s systems detected a generous amount of cinder particles that had been blasted onto the upper layers of the Earth’s atmosphere by the Canadian wildfires weeks earlier, and had travelled for 15 days before landing on Antikythera.

This is extremely important, as having a place where dust from different places converges can tell us great things about dust transport processes, said Amiridis, explaining that it may help us understand extreme weather phenomena and create early warning systems for them, as well as make better predictions about how climate change impacts weather.

“The island is the ideal natural laboratory to study how aerosols [tiny particles such as dusts, fumes or mists that are suspended in the air] form clouds, a key phenomenon for understanding and halting climate change,” he said.

Pangea recently received funding of about $25m from the EU. The team, currently made up of about 30 scientists, mostly engineers and physicists, are using it to install state-of-the-art technologies on the island. In particular, they are challenging much of the current scientific consensus surrounding dust particles in the air.

“Conventional knowledge says dust particles are randomly oriented in the atmosphere. We say these particles may align in the air vertically,” Amiridis said. If Pangea’s theory turns out to be true – which the scientists should know in about a year – we might need to reconsider everything we knew about climate change: “Vertically aligned dust particles allow 10-20% more radiation to sneak through the atmosphere and reach the ground,” Amiridis said, explaining that this extra radiation may result in an ever-warmer planet.

The team of scientists currently visit the island in groups of five once a month, but the plan is for groups of international researchers to live on the island for extended periods of time in specially built science hostels. For the rest of the time, just 1 sq km out of Antikythera’s 22-sq-km area is inhabited. The island has no petrol stations, no clothes stores, no bakeries and only two taverns, one of which also serves as a mini market and post office. Of the 22 permanent residents, anyone aged below 65 is in the overwhelming minority.

In 2019, the local Greek Orthodox church offered to pay people to move to the underpopulated island, as reported in Business Insider, but locals told me that the idea was abandoned before even being implemented, although they didn’t know why.

Instead, the few remaining Antikytherans hope that this new influx of scientists might help turn their fortune around. “Pangea will change our island. Please do your best to help our beautiful island,” one local said. Another woman told me how she loves those “physicists” like her own children. By and large, they are celebrating the arrival of the scientists as something that will bring a breath of fresh air to their shores.

It may seem unlikely that Antikythera has an illustrious past, of which the close-knit locals are all immensely proud. Modern Antikythereans trace their ancestry to the haughty Cretans that revolted against the Turks during Greece’s Ottoman Occupation years, left Crete and settled on this island.

In addition, the Antikythera Mechanism, a fascinating ancient Greek mechanical device that was used to calculate and display information about astronomical phenomena in 100 BC, was retrieved in local waters in 1901 from the wreck of a trading ship that had sunk in the early 1st Century BC (you can view the mechanism’s remains in the Greek National Archaeological Museum in Athens).

It seems fitting then that the island that washed up the world’s oldest computer more than a century ago is tapping into some of the world’s brightest minds to help create new strides in fighting climate change.

I was reminded of the island’s grand legacy when I headed to the Climate Change Observatory of Antikythera later that day with Tsichla and Marinou, along with Spiros Metallinos, the station operator, and Ioanna Mavropoulou, a research support administrative employee.

To reach the observatory in Katsaneviana, a desolate settlement about 4km south of Potamos that towers over the rest of the island at an altitude of about 193m, we zigzagged up some marvellous trails to breathtaking views over the island’s gin-clear waters. En route, I spotted a woolly-coated, big-horned goat – probably a wild one – standing on the edge of a steep gorge, just one of several thousands of his kind on the island.
When we finally reached the observatory, I was struck by how otherworldly it looked. Next to a huge antenna was a white-grey container housing PollyXT, an instrument that uses lasers to measure the movement of tiny dust particles suspended in the air, as well as water vapour and clouds in the atmosphere, sending the data to NOA for analysis. When darkness fell later that night, PollyXT’s tricks left me breathless; the electric green beam shot through the sky like a magical staircase to sparkling galaxies.

To the right of PollyXT was a golden photometer, which aligns with the Sun to measure the amount of electromagnetic radiation reaching the Earth, and sends data to Nasa. Nearby, an impressive white dome housed a solar polarimeter that follows the Sun’s orbit in the sky and measures the orientation of dust particles in the atmosphere. As Mavropoulou and Tsichla peered through the polarimeter’s telescope, I gazed ahead at the foggy fringes of north-western Crete in the distance, searching for the very point at which the three seas meet.

Pangea plans to install up to 40 more scientific instruments over the next three years. These will range from cloud radar systems to help us understand how clouds reflect sunlight and trap infrared radiation, to advanced spectrometers that measure greenhouse gases accurately and frequently, to sophisticated Doppler Lidar systems that measure how climate change is slowing our winds – and much more.