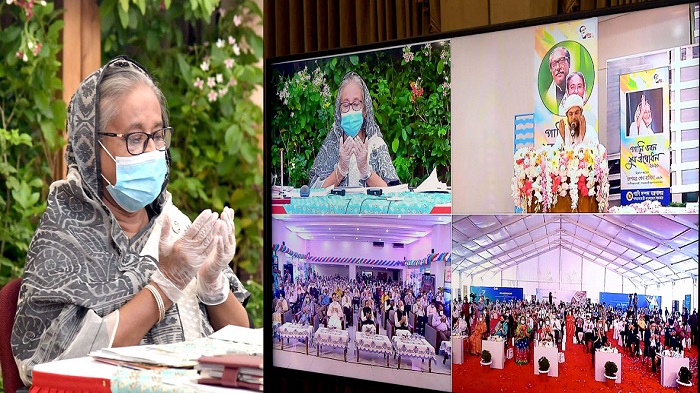 Prime Minister Sheikh Hasina on Thursday said her government has given special focus on establishing air connectivity with different countries.

“We are holding talks so that our Biman can get access of flying to different countries and have been working to upgrade Biman in every aspect such as its security and services,” she said, referring to Wednesday’s deal with the US in this connection.

The premier also said her government has been passing necessary laws as demanded by the international organisations so that Bangladesh Biman can fly to different countries likewise aeroplanes of other countries can enter Bangladesh.

She said these while inaugurating the newly constructed “Pani Bhaban”, the 13-storey “Parjatan Bhaban”, the headquarters of Bangladesh Parjatan Corporation (BPC) at Sher-e-Banglanagar, Agargoan, “Mural” of Father of the Nation Bangabandhu Sheikh Mujibur Rahman in front of the Shahjalal International Airport and “Bangabandhu Corner” inside the airport, after being connected virtually from her official Ganabhaban residence in the capital.

Concerned ministers and officials got connected from the Ganabhaban, Pani Bhaban (Bangladesh Water Development Board) in the city’s Green Road, and Osmani International Airport, Sylhet through a video conference.

The premier greeted concerned officials as Bangladesh and the USA governments on Wednesday signed Air Service Agreement that will pave the way to resume direct air connectivity between Dhaka and different cities in the US.

Referring to adding 13 modern aircraft to the Biman fleet during the tenure of her government, she said, “Since we have purchased some Boeing Bimans, we have an desire to develop direct air connectivity with different countries from Dhaka such as Dhaka-Tokyo and Dhaka to other countries.”

The premier said her government has taken different initiatives to develop the air connectivity with different countries through understandings.

Sheikh Hasina said that Bangladesh would be the most ideal place to make a bridge between the East and the West due to its geographical location and having position in the international air routes if the country could be developed in such a way.

“If we can take the advantage of the huge potential of Bangladesh’s geographical location in making bridge between the East and the West, we can earn huge money from the tourism sector as well the airlines,” she continued.

In this connection, she recalled Bangabandhu’s desire to build Bangladesh as the Switzerland of the East, saying that all the European countries have to use Switzerland for going from one part to another of the Europe.

Spelling out various programmes taken by her government for the development of the aviation sector, she said that after assuming office in 1996, they have built Chattogram Airport and upgraded it to the international level, established Sylhet airport as an international one and made Dhaka airport as a modern one with building all necessary infrastructures, including boarding bridge area.

The prime minister said her government has taken measures to make the Syedpur Airport as a regional one which Nepal, Bhutan and even India can use.

In this regard, she said the government is upgrading the Sylhet Airport so that other countries can use it alongside Bangladesh.

Besides, the government has been working to develop the Cox’s Bazar Airport as an international one to tap the huge potential of tourism as the world’s largest sandy beach of 80 miles is there.

A video presentation on the development schemes was screened at the function.