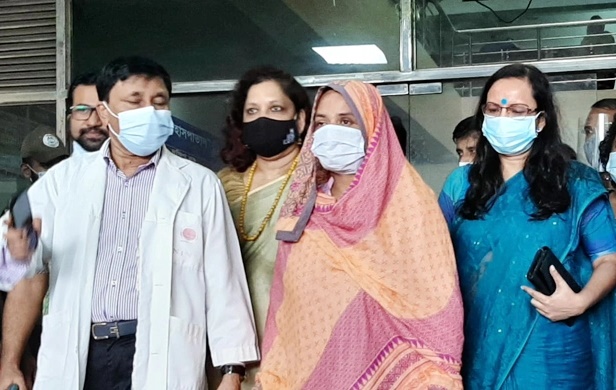 Ghoraghat Upazila Nirbahi Officer Wahida Khanam was released from the National Institute of Neurosciences & Hospital and shifted to Rehabilitation of the Paralysed (CRP) at Mirpur for further treatment.

She was admitted to hospital with critical injuries weeks ago following an attempt-to-murder attack at her official residence in Dinajpur.

She was discharged from the hospital after 12 noon on Thursday.

“The brain surgery conducted on her was hundred percent successful. Now she can walk but it will take one or two more weeks for full recovery. She has no disability now,” said Dr Mohammad Zahed Hossain, chief of the Neurotrauma Department of the hospital while briefing press at the hospital premises.

It will take around one month for her to return to normal life, he said.

UNO Wahida and her father were seriously injured at the attack carried out by miscreants at her home on the Upazila Parishad premises on September 3.