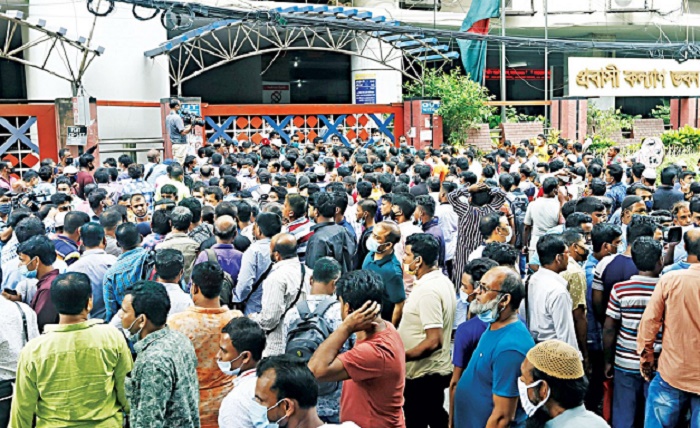 The government on Wednesday urged a group of foreign diplomats to resolve the problems of expatriate Bangladeshi workers stranded at home due to lockdown and international flight suspension amid the COVID-19 pandemic.

Talking to reporters after the briefing, Foreign Minister Momen said they requested the countries to consider the workers' issue sympathetically.

He said around 6,000 expatriate workers have already returned to their respective workplaces abroad and others will also go soon.

The Foreign Minister said some 1,37,000 expatriate Bangladeshis returned home amid the coronavirus pandemic.

On a question, the Foreign Minister suggested that the KSA-bound expatriates, who have yet not been able to obtain necessary documents from their employers, should try to find new employers and also look for alternative jobs.

He said only 53 of the Saudi-bound workers have yet not obtained permission from their employers. However, nearly 6000 Bangladeshi expatriates have already left for Saudi Arabia immediately after the resumption of flights. He hoped that all the workers would go but they have to be patient.

The Foreign Minister also told reporters that the Saudi Ambassador informed the meeting that the Kingdom will reissue visas for around 25,000 newly recruited workers from Bangladesh, who were scheduled to go to Saudi Arabia in March but they got stranded due to international flight suspension amid the Covid-19 pandemic.

Momen said some 20 flights will be operated from Dhaka to Saudi Arabia from October 1, with 10 flights by Saudi Airlines and 10 flights by Biman Bangladesh Airlines.

Expatriates' Welfare and Overseas Employment Minister Imran Ahmed said they have already informed about the problems currently facing by the stranded workers to Saudi Embassy in Dhaka and are looking for solution to the problems.