‘I’ll work for a strong pipeline for nat’l team’ 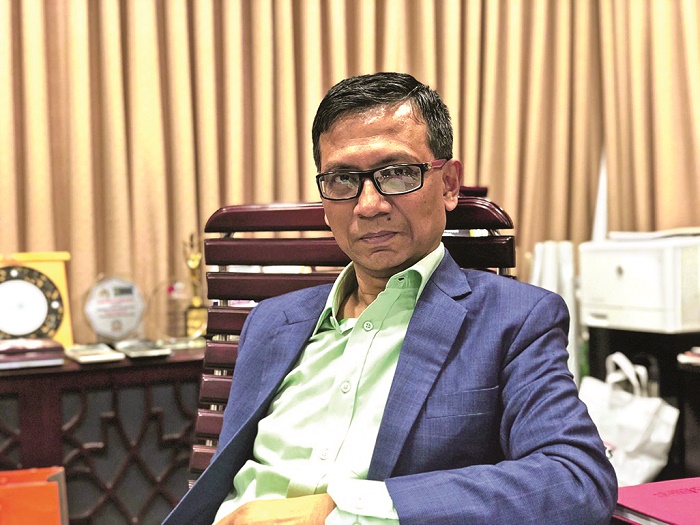 Bashundhara Kings President Imrul Hasan, who is running for the post of vice-president from Sammilita Parishad for the upcoming Bangladesh Football Federation (BFF) polls, said that he would work to build strong pipeline for national teams if he is elected.

The much-awaited election and congress of BFF, also known as BFF Elective Congress 2020, will be held on Saturday (October 3) at Pan Pacific Sonargaon Hotel in the capital. A total of 139 councillors will be able to exercise their franchise to form the 21-member BFF executive committee, including president, senior vice-president, four vice presidents and fifteen members.

In an exclusive interview to The Daily Sun, Kings President said that he got positive responses from delegates and was confident that he will be elected. He also shared his plans and expectations.

Here are the excerpts of the conversation.

The Daily Sun: The much-awaited election is knocking on the door. How was your campaign? How did the delegates respond to your election campaign?

Imrul Hassan: We got positive responses from all sides. Country’s entire football fraternity welcomed us. I'm expecting something good on October 3.

The Daily Sun: How confident are you about being elected?

Imrul Hassan: I’m confident; but I am not thinking about victory or defeat. I’ve been working for the development of football and always want to do it. I just want to fulfill my responsibilities as a football organiser. I’ve got chances to talk to the delegates, grassroots organisers during my campaign. I've come to know about their needs. I've closely seen the real picture. I think these are big achievements of my campaign; because it gave me a target. I'll work in these issues whether I get elected or not.

The Daily Sun: You want to work on grassroots football especially on lower division leagues, clubs, divisions and districts. It is a vast and complex arena of domestic football. Do you have any specific plan for it?

Imrul Hassan: I’ve said that if I get elected I will work on lower division leagues, clubs, divisions and districts including pioneer league, first division, second division, third division, age-level and district-level competitions. These leagues, competitions are core of a country's football because they provide footballers in the pipeline for national teams. But unfortunately these leagues, competitions are not regularly arranged in Bangladesh. My first target will be to organise these events regularly. Besides, I've some plans to launch some annual age-level competitions in different districts and divisions.

The Daily Sun: You have proved your worth as a club organizer. How do you plan to utilise your organisational skill at the national level?

Imrul Hassan: I've been working at club-level so far and BFF is a huge place. I’ve already stated some of my special plans for grassroots football. I will not be able to execute these from club-level. I need a big and national platform and only BFF can provide this. I believe as I could perform at club level, I will be able to excel at national level as well. But I can’t do it alone. I need the assistance and support of our grassroots organisers. A big number of them are experienced and have been working in this place for a long time. I need their experience and support.

The Daily Sun: Your panel published a four-page manifesto featuring 36 pledges last week. Do you feel you will be able to keep the pledges?

Imrul Hassan: You need a destination or aim before starting a journey. Then, you take different ways to go there. We can consider this manifesto as our aim or destination. I believe that we can keep our pledges if we play our roles with sincerity.

The Daily Sun: The election is heating up the social media. Do you feel it can influence the election?

Imrul Hassan: I'm observing the unfolding situation. I don't know whether it is right or wrong; because it is relative. But I'll request the social media users not to indulge in personal attacks. I expect constructive criticism on my works from them. I urge them to do so rather than making narrow personal attacks.

The Daily Sun: Do you want to say anything to the delegates?

Imrul Hassan: Our respected delegates will elect the future of Bangladesh football. They are the real influencers and will decide what we will get from football for the next four years. I'm confident enough about them and believe that they will exercise their franchise to elect the right persons, true football lovers.

The Daily Sun: Any message for the country's football fans?

Imrul Hassan: I know that football is the name of an emotion. We also want to create a change in the footballing arena like you. I believe that the next committee will work for that desirable change.