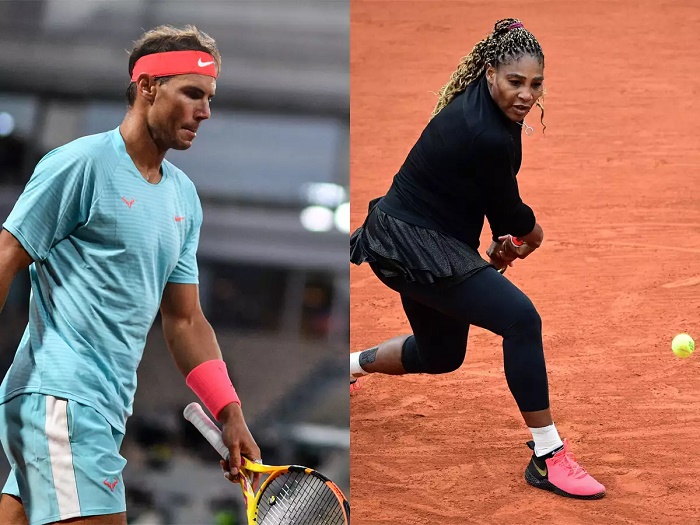 Rafael Nadal looks to build on a promising start to his quest to match Roger Federer's 20 Grand Slam titles at the French Open on Wednesday while Serena Williams faces a familiar foe in round two of her latest push to equal Margaret Court's all-time mark.

Top seed and women's favourite Simona Halep puts her 15-match winning streak on the line as she targets another run at a second Roland Garros crown in three years.

Nadal needs one more major to pull level with long-time rival Federer and owns an astonishing 94-2 record in Paris going back to his triumph on debut in 2005.

The Spaniard showed little trouble in handling the heavier conditions in his opening win over Egor Gerasimov at a tournament postponed four months by the coronavirus pandemic.

However, the 34-year-old is wary of an untimely slip-up having made serene progress on his return to action in Rome before running aground in the quarter-finals.

"Six months without playing a single tennis match is not easy," said 12-time French Open winner Nadal, who touched down in Paris without a clay title to his name for the first time.

"I said in Rome when I played the first two matches well, I said, 'Okay, don't believe things are going to be like this.'

"I know how difficult are the comebacks. I had to stop playing tennis for more than two months, so situation is difficult. It's normal, some up and downs."

In the women's draw, Williams heads into another encounter with Tsvetana Pironkova after the pair squared off in the last eight of the US Open earlier this month.

Williams came from a set down in New York to beat fellow mother Pironkova, in the Bulgarian's first tournament appearance since the 2017 Wimbledon championships.

"She's playing well, but I am too," said Williams, imploring herself to play with more confidence after a slow start against Kristie Ahn in round one.

She has not gone beyond the last 16 in Paris since her defeat to Garbine Muguruza in the 2016 final. Her last major came at the 2017 Australian Open while pregnant.

She battles fellow Romanian Irina-Camelia Begu on Court Suzanne Lenglen, having been spared the grim weather by playing under the new retractable roof in her opener.

Halep has won each of her past three tournaments, resuming the interrupted season with titles on clay in Prague and Rome following her victory at Dubai in February.

Sixth seed Alexander Zverev will come up against Pierre-Hugues Herbert in the final match scheduled on Court Philippe Chatrier.