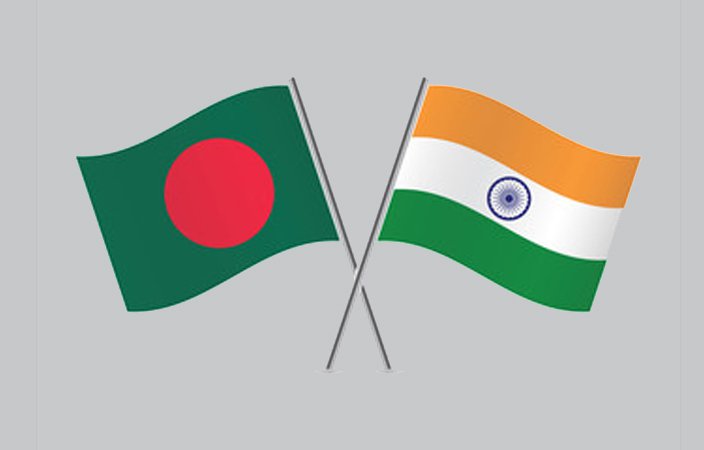 The sixth meeting of the India-Bangladesh Joint Consultative Commission (JCC) was held on September 29, 2020.

Although Dhaka was scheduled to host the meeting, due to the COVID-19 situation the meeting was held on virtual platform.

# Both ministers expressed satisfaction over the current state of bilateral relations under the leadership of the Prime Minister of Bangladesh Sheikh Hasina and the Prime Minister of India Narendra Modi. The two Ministers reviewed the entire gamut of bilateral relations and expressed satisfaction over significant progress in the implementation of various decisions taken during the fifth JCC meeting held in New Delhi in February 2019 and the visit of Prime Minister Sheikh Hasina to New Delhi in October 2019.

# Noting that the onset of the COVID-19 pandemic had posed significant challenges to nations across the world, the Ministers expressed satisfaction at the manner in which sustained engagement between the two countries has been maintained during this time. The first trial movement of cargo from Kolkata to North East India through roads and waterways of Bangladesh, signing of the second addendum to the Protocol on Inland Water Transit and Trade, export of goods from India using rail route, including container and parcel trains, are initiatives which could be taken successfully despite the COVID induced constraints, reflecting the excellent understanding shared between the two countries. In this regard, Foreign Minister reiterated Bangladesh’s commitment to support India in strengthening connectivity in the region for creating a win-win situation for both economies.

# Reiterating the commitment of India to prioritize the supply of COVID-19 vaccines, the External Affairs Minister emphasized the importance of Bangladesh in India’s ‘Neighborhood First’ policy. In this context, the Ministers directed their officials to expedite exchange of required information regarding Phase-III testing, vaccine distribution, co-production and delivery in Bangladesh.

# The two sides welcome the holding of a virtual Prime Minister level Summit in December 2020. Recalling that the visit of Prime Minister Narendra Modi to Bangladesh in March 2020 had to be postponed due to the sudden onset of COVID-19, the two sides hoped that the visit could be rescheduled, coinciding with the commencement of the 50th anniversary celebrations of Bangladesh’s independence as well as establishment of diplomatic relations between Bangladesh and India.

# The two Ministers jointly unveiled a commemorative postal stamp issued by the Government of Bangladesh on the occasion of the 150th birth anniversary of Mahatma Gandhi. External Affairs Minister announced India’s decision to launch a commemorative postal stamp on the occasion of the birth centenary of Bangabandhu Sheikh Mujibur Rahman on 16 December 2020. Both countries decided to jointly celebrate the Golden Jubilee of the Liberation War and the fiftieth anniversary of the establishment of diplomatic relations between the two countries in India, Bangladesh and in select third countries through their respective Missions. Both sides discussed a number of programs to be held jointly, including ceremonial military parades on 16 December in Dhaka and New Delhi/ Kolkata; honoring Indian war veterans of 1971; revival of the historic Mujibnagar-Kolkata road through inauguration of Swadhinota Shoroni and establishment of a permanent immigration check post at Mujibnagar; Friendship Fair or Milon Mela through collaboration of the two border guarding forces; year-long seminars in different cities of Bangladesh and India with participation of civil society, intelligentsia and war veterans of 1971; and simultaneous launching of a website on 50 years of victory and friendship where documents of relevance to the 1971 victory will be available for public access. It was decided to mount a Bangabandhu-Bapu digital museum in India and Bangladesh and at other places. The two Ministers directed their respective Ministries to form a joint committee to coordinate these epoch events.

# Both sides also discussed progress on making of the biopic on Bangladesh’s Father of the Nation Bangabandhu Sheikh Mujibur Rahman, under the direction of Indian film director Shyam Benegal. Simultaneously, they also stressed on the need to start work on the Liberation War documentary, for which Bangladesh side informed that the process for selecting a director from Bangladesh will be completed soon.

# Both Ministers noted the discussions on border management and security in the recently concluded 50th Director General Level Talks (DGLT) between BSF and BGB in Dhaka. The two Ministers stressed on the need for further strengthening effective implementation of the Coordinated Border Management Plan (CBMP). Both sides agreed that the loss of civilian lives at the border is a matter of concern and urged the concerned border forces to enhance coordinated measures to bring such border incidents down to zero. Importance of educating the border population about the sanctity of the international border was stressed upon. The Indian side also requested for an expeditious approval to erecting the Single Row Fencing in vulnerable patches along the border, within 150 yards, that will help contain border crimes.

# The two Ministers noted that India and Bangladesh are currently the top two economies in South Asia and greater measures could be taken for mutually beneficial enhancement of trade and investment between the two countries, including removal of all forms of barriers to trade. Bangladesh side reiterated appreciation to the Government of India for duty free access of Bangladeshi products into the Indian market under SAFTA, as a result of which Bangladeshi exports to India could cross the US$ 1 billion dollar mark in 2018-19, making India the second such country in Asia, though the balance of trade remains in favour of India. It was highlighted that for Bangladesh to better utilize the concessions under SAFTA, both sides need to focus on adequate trade facilitation.

# In this context, the two Ministers also noted the need for harmonization of standards and mutual recognition of certificates as an important element of trade facilitation. Indian side reiterated its suggestion to Bangladesh side to renew the accreditation of Bangladesh Standards and Testing Institution for continued acceptance of test certificates.

# Both Ministers tasked their officials to work closely to avoid disruption of supply chains, particularly in the post-COVID period. They emphasized the need to resume unhindered two-way trade through the land ports, while optimising use of the four trans-border railway connections as well as inland and coastal waterways. Both countries agreed to initiate ‘air travel bubble’ flights to meet the urgent requirements of certain categories of travellers on both sides during the pandemic. Bangladesh side also requested the Indian side to resume regular travel through land ports at the earliest.

# Highlighting the interdependency in the jute sector between both countries, Foreign Minister urged External Affairs Minister to address the long pending issues of anti-dumping / anti-circumvention duties imposed on export of jute products and certain other exports from Bangladesh to India. The Indian side reiterated that anti-dumping investigations are carried out by the Directorate General of Trade Remedies through quasi-judicial proceedings and assured facilitation once the formal application is filed. Both sides agreed to hold consultations at an early date to look into various aspects of the imposition.

# Foreign Minister reiterated the request to the Indian side for informing in advance of amendments in export policy that the Government of India may take which impact India’s export of essential commodities to Bangladesh, since such exports are an important factor influencing Bangladesh’s domestic market. The Indian side took note of this.

# Both sides noted the positive cooperation in the power and energy sectors. It was agreed to expedite implementation of projects including India Bangladesh Friendship Pipeline, Maitree Super Thermal Power Project as well as other projects.

# Both sides expressed satisfaction at the increasing pace of defence cooperation including in training, exchanges and capacity building. They welcomed the proposal to hold the next meeting of the Annual Defence Dialogue in November. They urged an early implementation of the Defence Line of Credit.

# The two Ministers reiterated their commitment to finalization of the Interim Agreement for sharing of the waters of the Teesta. They also underscored the need for early conclusion of Framework of Interim Agreement on sharing of waters of six other joint rivers, namely, Manu, Muhuri, Khowai, Gumti, Dharla and Dudhkumar. In this regard, the two Ministers recalled the positive contribution of the Joint Rivers Commission mechanism in resolving issues related to the common rivers and urged the concerned authorities to consider convening the Ministerial level JRC meeting between the two countries.

# Foreign Minister requested the cooperation of the Indian side for the implementation of Bangladesh’s Upper Surma-Kushiyara project. The Indian side noted that the feasibility report was under examination.

# Foreign Minister requested the Indian side to accord reciprocal recognition of Certificate of Competency (CoC) for Bangladeshi seafarers, in view of the fact that Bangladesh has been recognizing the CoC of Indian seafarers since 2001. The Indian side conveyed that the recognition of Certificate of Competency for Bangladesh seafarers would be considered in accordance with the international convention and in the interest of both parties

# Foreign Minister informed that the Government of Bangladesh has been issuing visas and travel clearances for Indian nationals to travel to Bangladesh during the ongoing pandemic, upon submission of relevant documents. He requested the Indian side to consider resuming visa issuance for Bangladeshi nationals, including medical patients seeking urgent treatment, students studying in various educational institutes in India and business persons. The Indian side conveyed that all these issues will be automatically streamlined once the air bubble comes into place. Bangladesh side reiterated the request to ease the travel of Bangladeshis to India by land route also.

# Recognizing that terrorism remains a significant threat to global peace and security, both sides reiterated their strong commitment to eliminate terrorism in all its forms and manifestations.

# The two sides noted that Home Secretary level talks are scheduled to be held shortly.

# External Affairs Minister thanked Bangladesh for supporting India in its election to the United Nations Security Council. Both countries agreed to continue working together towards combating climate change, attainment of the SDGs and protection of the rights of migrants. The two Ministers reiterated the importance of the safe, speedy and sustainable return to Myanmar of the forcibly displaced persons from the Rakhine State of Myanmar, currently being sheltered by Bangladesh. In this regard, Bangladesh Foreign Minister emphasized that unless the problem is resolved quickly, there are possibilities of pockets of radicalism disrupting economic growth, peace and stability in the region and requested India’s leverage, to address the crisis.

# Both Ministers highlighted that given the regional and global economic scenarios following the outbreak of COVID 19, leveraging the resources of the two regional organisations, namely SAARC and BIMSTEC have become more imperative now than ever before. India thanked Bangladesh for its contribution to the SAARC COVID Emergency Fund. Bangladesh requested the support of India in strengthening cooperation under IORA to ensure maritime safety and security in the Indian Ocean Region. Bangladesh also assured to continue playing an active role in the IORA as it assumes Chairmanship of the Association in 2021.

# Both Ministers underscored the value of positive media reporting on the bilateral engagements between the two countries and agreed to call upon their respective media communities to play more responsible roles in this regard.

# Both sides agreed to hold the next meeting of the Joint Consultative Commission in New Delhi at a mutually convenient date to be decided through diplomatic channels.