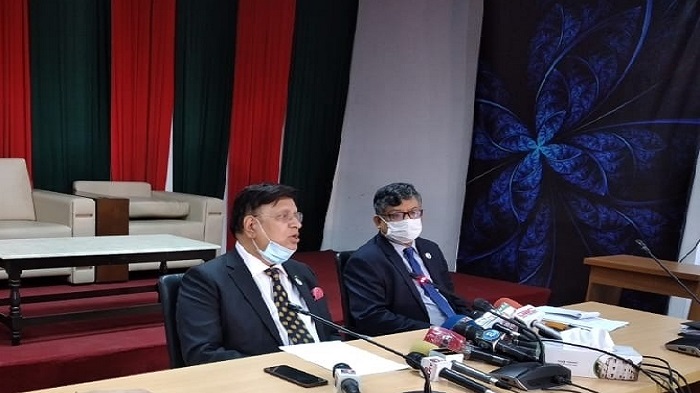 Bangladesh and India have agreed to resolve the issues of sharing water of common rivers, including the signing of Teesta water-sharing agreement.

“We have positive responses from the Indian side … We are always hopeful about signing of Teesta treaty,” Foreign Minister AK Abdul Momen said.

“We share 54 common rivers. The waters unite us and sustain us. We remain committed to Teesta water sharing and, in the meanwhile, are equally committed to move forward on other seven rivers on which data has been already shared,” said Indian External Affairs Minister Subrahmanyam Jaishankar.

Bangladesh also conveyed deep concern over deaths along the Bangladesh and India international border, said the minister, adding that both sides discussed sustainable repatriation of Rohingyas to their place of origin in Rakhine State.

"We want no death along the border. It's a shame for both friendly countries like Bangladesh and India. It hurts our solid relations," the Bangladesh foreign minister said.

Bangladesh Foreign Minister AK Abdul Momen and his Indian counterpart Dr. S Jaishankar co-chaired the meeting attended by secretaries and high-level representatives from many Ministries and Divisions of the two countries.

Although it was Dhaka’s turn to host the JCC meeting, the high-profile and long-awaited meeting was held on web platform due to the ongoing coronavirus pandemic.

During the meeting, the two ministers reviewed and discussed the entire gamut of bilateral relations, including cooperation on connectivity, security, political issues, development, trade and investment, power and energy sector and people-to-people contacts.

Both sides expressed satisfaction with the fact that Bangladesh and India have maintained robust engagements even during the current situation induced by the Covid-19 pandemic.

The two foreign ministers recognised the positive trajectory of bilateral relations enjoyed by the two countries and exchanged gratitude for maintaining the gesture of good neighborliness.

In the backdrop of the corona pandemic, the two sides discussed collaboration in the health sector, specially in supply, delivery, distribution and co-production of Covid-19 vaccine.

The Bangladesh foreign minister appreciated the Indian government’s assurance that Bangladesh will be given priority in supply of the potential vaccine in the future.

Both sides agreed to jointly celebrate the Golden Jubilee of the Independence of Bangladesh and the 15th anniversary of the establishment of diplomatic relations between the two countries.

It was agreed that a virtual meeting at Prime Ministers level will be held in December this year between the two countries.

A number of programmes were proposed to be organised jointly to mark the two major events, such as revival of the historic Mujibnagar-Kolkata road, honouring the Indian war veterans, ceremonial military parades on 16 December, organising friendship fairs, year-long seminars in different cities of Bangladesh and India and simultaneous launching of a website on 50 years of victory and friendship.

The two sides agreed to establish Bangabandhu-Bapu digital museums both in Bangladesh and India.

The Indian government will also release a commemorative stamp on the birth centenary of Bangabandhu on 16 December 2020 to pay homage to the life and ideology of the great leader.

During the meeting, the Bangladesh side said that the entire nation is deeply concerned at the rise in killings of Bangladeshi nationals by Indian border security forces.

The Indian side agreed that the loss of civilian lives on the border is a matter of concern.

Both sides urged the border forces concerned to enhance coordinated measures to bring down border incidents to zero.

They underscored the necessity of early solution to the longstanding Teesta water sharing issue and early implementation of the agreements on sharing of all the common rivers.

The two ministers reviewed the possibilities of resumption of air connectivity, during the ongoing pandemic, through special air bubble arrangement with equal share of frequencies and routes by the carriers of the two countries.

The Bangladesh side requested the Indian side to reciprocally ease visa and land border restrictions for Bangladeshi nationals, particularly for medical patients and students enrolled in various educational institutions of India.

The Bangladesh side also thanked India for the concessions being provided under the South Asian Free Trade Area (SAFTA).

However, various non-tariff barriers and lack of adequate trade facilitation is impeding flow of Bangladeshi products into India, particularly, the North East.

Bangladesh requested the Indian side to address issues of accreditation, certification, standardization, port restrictions and developing port infrastructure to enable exports of Bangladesh to India.

The Bangladesh foreign minister requested his Indian counterpart to look into the export of essential commodities, such as onions by India, since it impacts Bangladesh’s domestic market. Bangladesh also laid emphasis on the equitable application of investment policies by India.

The two sides also discussed implementation of the development projects under Indian Lines of Credit in a timely manner.

They agreed to form a high-level monitoring committee with Secretary ERD and Indian High Commissioner in Bangladesh leading it on each side.

The Bangladesh foreign minster expressed the hope that as a non-permanent member of the UN Security Council, India will play a more meaningful role in finding a lasting solution to the Rohingya crisis, including their early repatriation to Myanmar in a safe and sustainable manner.

The talks were held in a very cordial environment. After the talks, both ministers jointly unveiled two commemorative stamps as part of the celebration of the 150th birth anniversary of Mahatma Gandhi.

It may be noted that the 5th JCC meeting was held in New Delhi in February 2019.