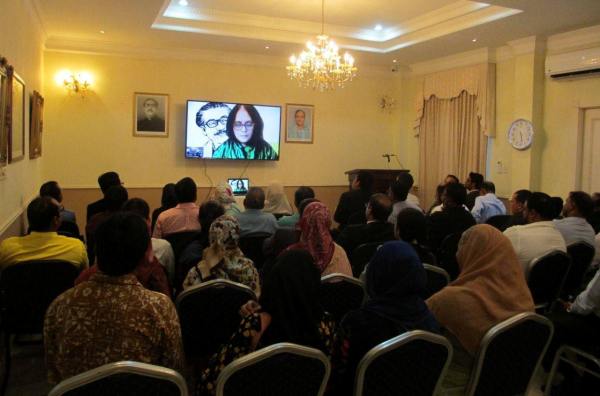 The High Commission of the People’s Republic of Bangladesh in Bandar Seri Begawan on Monday screened a documentary on the life and work of the Prime Minister of Bangladesh Sheikh Hasina.

The program at the chancery premise began in the afternoon by reciting verses from the Hoy Quran, followed by a welcome speech by the Head of Chancery.

With the presence of several scores of diplomats, officials of the ministry of Foreign Affairs of Brunei Darussalam, and the distinguished members of the Bangladeshi community in Brunei at the chancery, the Mission Screened ‘ Hasina: A daughter’s Tale,’ which depicted the life of Sheikh Hasina, the longest-serving Prime minister of Bangladesh.

The Centre for Research and Information and Applebox jointly produced the film. The film covers the assassination of Bangabandhu Sheikh Mujibur Rahman, along with most of his family members on the 15th August 1975.

Sheikh Hasina and her younger sister Sheikh Rehana were the only survivors of the carnage.

The High commissioner-designate Nahida Rahman Shumona spoke about the life-long struggle of Bangabandhu Sheikh Mujibur Rahman for the independence of Bangladesh.

She also made a brief sketch on how PM Sheikh Hasina uplifted Bangladesh to a middle-income country despite having myriads of global and local challenges.

The programme was closed with prayers for the Prime Minister and her family, who all are relentless in their pursuit to realize the dream of the father of the nation-A Sonar Bangla.