5 dead after explosion at a chemical plant near Wuhan 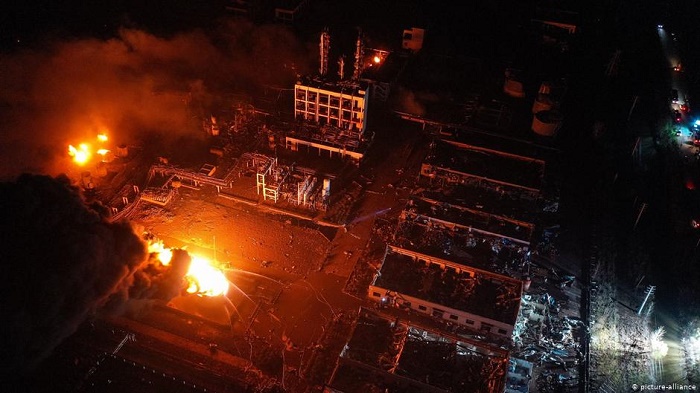 An explosion at a chemical plant near the city of Wuhan in central China has killed at least five people and wounded one, according to local officials.

The blast took place at around 2.15pm local time today at an industrial park in the central Chinese city Tianmen, west of the provincial capital Wuhan, when the manufacturer’s equipment was being tested.

The injured resident has been taken to a hospital for treatment while rescue efforts are ongoing, a government notice says.

The yellow smoke released from the plant could indicate a nitric acid leak, a local resident told The Beijing News.

Before the Monday incident, the firm was fined in April after it was caught illegally dumping wastewater, according to Shanghai-based news outlet The Paper.

Other media reports say that the chemical factory has also received multiple complaints from local residents for releasing gases that caused irritation.

Last month, another huge explosion at a chemical plant in Hubei's Xiantao city killed six people and injured four. The authorities said the incident was caused by 'irregular behaviour' by the operators and a lack of risk identification.

Industrial accidents are common in China, where safety regulations are often poorly enforced.

In March last year, a blast at a chemical plant in eastern Jiangsu province killed 78 people and injured hundreds.

In November 2018, a truck carrying combustible chemicals exploded at the entrance of a chemical factory in Zhangjiakou, a northern Chinese city that will co-host the 2022 Winter Olympics, killing 23 people and injuring 22 others.

Among the worst accidents was a massive 2015 explosion at a chemical warehouse in the port city of Tianjin that killed 173 people, most of them firefighters and police officers. That blast was blamed on illegal construction and unsafe storage of volatile materials.