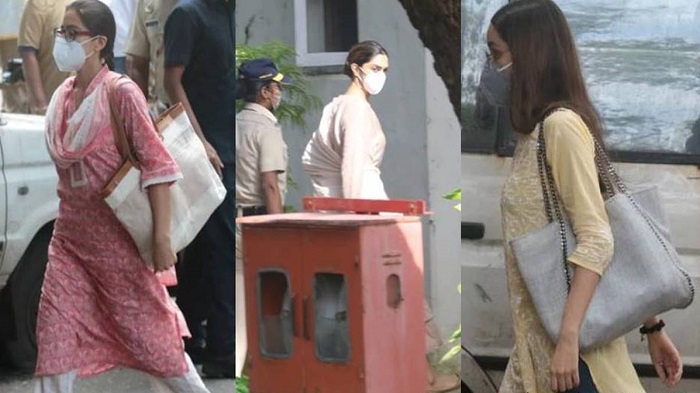 The Narcotics Control Bureau (NCB) questioned actors Deepika Padukone, Shraddha Kapoor and Sara Ali Khan and Padukone’s manager Karishma Prakash for over five hours on Saturday as part of its investigations into a purported “drug nexus” in Bollywood. The agency also made its 20th arrest in its investigation into the alleged supply and consumption of drugs in the Hindi film industry, taking former Dharmatic Entertainment executive producer Kshitij Prasad into its custody on Saturday.

Senior NCB officials claimed that Prasad, an Executive Producer at Dharmatic Entertainment – a sister concern of Dharma Productions, a production house owned by Karan Johar – was in touch with major drug peddlers in Mumbai. “Some of these peddlers have already been arrested while the others are yet to be caught. Prasad has told us that he used to procure drugs for his own consumption. We are investigating whether he also used to supply those drugs to others,” said an official.

Prasad was arrested in FIR 16/2020 of the NCB’s Mumbai Zonal Unit. Earlier this month, the agency had informed the court that it had decided to file a second FIR “to uproot the drug citadel in Mumbai, especially in Bollywood”. The agency had previously arrested actress Rhea Chakraborty, her brother Showik and 17 others under this FIR and seized small quantities of hashish, LSD dots and marijuana.

However, the NCB is yet to make a single arrest or recover narcotic substances in FIR 15/2020, which its Delhi Zonal Unit filed against six people Chakraborty on the basis of Whatsapp chats purportedly discussing drugs provided to it by the Enforcement Directorate.

On Saturday, Jain said that the three actresses were questioned in connection with both FIRs. “Statements of four people were recorded today. I cannot comment on what they said. Their statements will be submitted to the court,” he said. Jain said that the agency will now review the arrests and seizures it has made before deciding who to question next. “The actresses have denied taking drugs. We may serve them a summons for further questioning if we find new evidence. Their questioning is over for now,” said an NCB official.

NCB Deputy Director (Operations) K P S Malhotra had earlier said that Sara Ali Khan and Shraddha Kapoor will be questioned in connection to both the FIRs. “There are a few aspects of the cases that warrant examination of Sara and Shraddha. So, they will be examined in both cases that have common linkages,” he said.