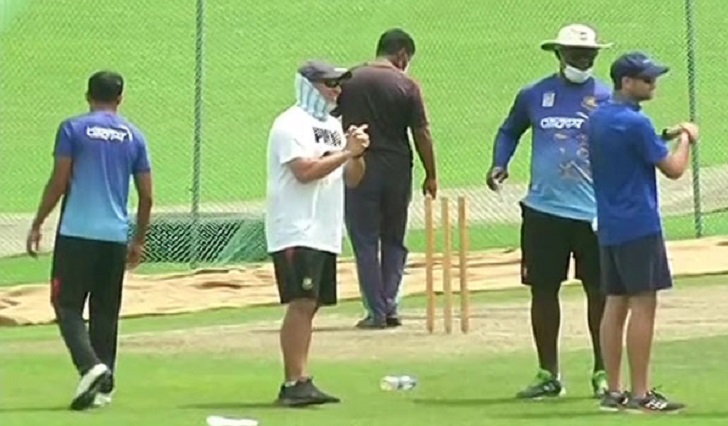 Bangladesh Cricket Board (BCB) on September 26 announced a three-day break for the cricketers at the expense of breaking the bio-bubble in order to keep them refreshed mentally.

BCB formed a 27-member preliminary camp for a one-week residential camp from September 20 ahead of the tour of Sri Lanka as part of preparation for the Test series which was scheduled to start from October 23 earlier.

BCB decided to allow their cricketers to get some gas by staying with their close ones after completing a hectic one week inside the bio-bubble environment as the tour is yet to be finalised as hosts are not ready to complete the 14-day mandatory quarantine in the island.

However, BCB is not losing all their hopes as they are still waiting for the response from Sri Lanka Cricket (SLC) regarding a revised tour guideline while SLC has been in constant touch with their Health Ministry to be able to send BCB a revised guideline for the tour.

Though there is uncertainty regarding the tour, it hardly seemed to impact Tigers’ leading cricketers namely Tamim Iqbal and Mushfiqur Rahim as they along with others arrived at SBNCS on the opening day of the three-day break.

Head Coach Russell Domingo along with other members of the coaching staff are staying at the hotel during the break and decided to join their charges in the practice session at the home of cricket.

Meanwhile, there has been no further development regarding the fate of the upcoming tour of Sri Lanka though State Minister for Youth and Sports Zahid Ahsan Russell said on Sunday that tourists will not travel to Sri Lanka with the 14-day quarantine condition in place which dictated that the cricketers’ movement will be limited to their hotel room.

Zahid’s comment came few days after SLC threatened that they will have to reschedule the tour if the tourists don’t agree to the guideline that will be provided by the health task force.

It was learnt that Sri Lanka’s COVID-19 Task Force is not ready to reduce the mandatory 14-day quarantine period more so after there is speculation regarding a second wave of coronavirus pandemic in October.

“We are very interested in making sure that the tour takes place. We are very concerned about it and our players are practicing for the series. We are in discussion with the board all the time,” said Zahid.

“We urged SLC to decrease the quarantine period, besides that, the condition they put forth regarding the hotel room, we denied that too. If a player is staying in a room for 14 days, certainly he will lose fitness because he will not able to practice,” he said.

“We told them (SLC) that we should have the permission to use the gym and other facilities of the hotel. We need the access to get this.  We may get a decision from Sri Lanka soon,” he said.

Bangladesh were expected to travel to Sri Lanka on September 27 for the three-Test series that is scheduled to start from October 23 but later tourists had to alter their plans as they failed to get a response from the hosts regarding their concern over the quarantine period.

The Sri Lanka tour provided a chance for the Tigers to get back to international cricket after a six-month long break imposed by the coronavirus pandemic. With uncertainty now reigning on the fate of the series, if the two boards cannot come to a consensus, the players will have to extend their pause from international cricket during these uncertain times.