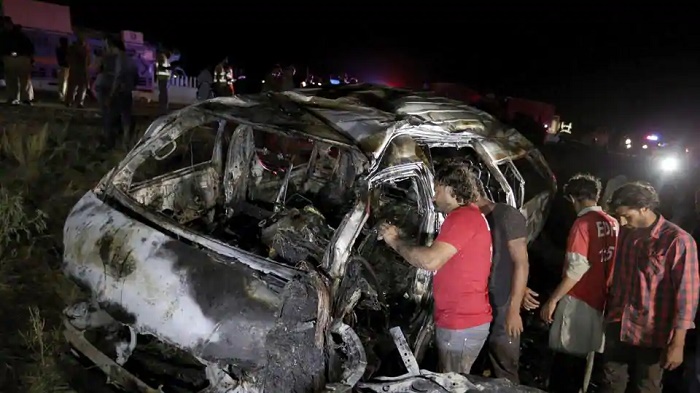 At least 15 people have been charred to death after a passenger bus they were travelling in caught fire and overturned in Pakistan, officials said.

The over-speeding bus, on its way to Karachi from Hyderabad, skidded off the road and burst into flames on Saturday, police and rescue officials said.

At least 15 people have lost their lives in the accident near Nooriabad area, they said.

“They were 22 passengers in the bus when it overturned and caught fire… many of them were trapped inside and got burnt. Others who escaped or have been rescued also suffered injuries,” additional IG Motorway Police Dr Aftab Pathan told the media.

Three of the survivors were in a critical condition, he said, adding that officials were trying to retrieve the bodies from the wreckage of the bus.

“The accident took place after the bus travelled some 60 kilometres from Hyderabad and the vehicle has been totally destroyed in the accident,” the officer said.

Edhi ambulances from Karachi and Edhi Home rushed to the spot along with fire tenders to extinguish the blaze.

Earlier this year, six members of a family, including four children, were charred to death while five others injured when a fire broke out in a moving van in New Karachi area.