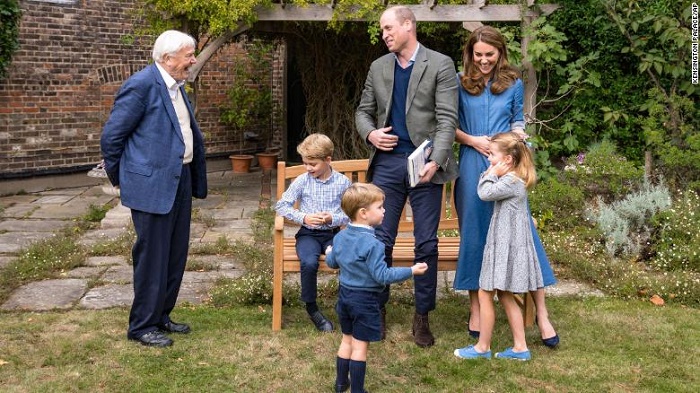 Naturalist and veteran broadcaster David Attenborough has given Prince George a souvenir to treasure: a fossilized giant shark's tooth that he discovered in Malta more than 50 years ago.

The young royal, 7, received the gift from the TV host at Kensington Palace in London earlier this week, after a private screening of Attenborough's latest environmental documentary, "A Life On Our Planet," which focuses on the harm that has been done to the natural world in recent decades.

Prince William and Attenborough attended the outdoor viewing in the palace's grounds on Thursday, before the 94-year-old spoke to the Duke and Duchess of Cambridge's three children and presented his gift to George.

The tooth, which belonged to a member of the extinct shark species Carcharocles megalodon, was discovered by the world-renowned naturalist in some limestone on the island of Malta during a family trip there in the late 1960s.

The megalodon, whose name means "giant tooth" in Ancient Greek, is thought to have had an average length of more than 10 meters, according to Encyclopedia Britannica.

On the same day that he gave George the fossilized tooth, Attenborough broke the record for the shortest time taken to amass 1 million followers on Instagram, Guinness World Records said.

After joining the social media platform to raise awareness about the climate emergency, the broadcaster took just over four hours to reach the milestone.

In his first Instagram post, Attenborough warned people in a video that "the world is in trouble," listing examples including the melting of glaciers.

He promised that he would record more messages in the coming weeks explaining the problems the world faces regarding climate change and offering solutions to them.

The 94-year-old naturalist has teamed up with Duke of Cambridge to work on the Earthshot Prize, which William launched in December last year to help tackle the climate crisis.