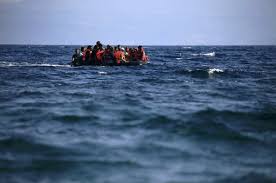 Twenty-two Europe-bound migrants, including eight Bangladeshis, were rescued from Libya's Mediterranean coast, after their dingy capsized in the sea.

The others are from Egypt, Syria, Somalia and Ghana.

The UN migration agency also revealed that bodies of three migrants from Syria and Ghana were retrieved from the sea.

The boat with the migrants on board had set off from the town of Zliten, east of the Libyan capital of Tripoli on late Wednesday.

Masoud Abdal Samad, commodore of Libyan Coast Guard, warned that the death toll may rise as their search teams scoured the area to trace the missing. "Autumn is a very difficult season.

When it gets windy, it's deadly. It changes in an instant," he said on the nature of the Mediterranean Sea in the area.

However, the survivors were taken to the Zliten detention center, run by the Tripoli-based government's Interior Ministry.

Migrants rescued at sea and returned to Libya routinely land in detention centers notorious for torture, extortion and abuse.

Earlier on Thursday, Amnesty International, a UK based human rights watchdog, revealed that thousands of migrants have been forcibly disappeared from the unofficial militia-run detention centers.