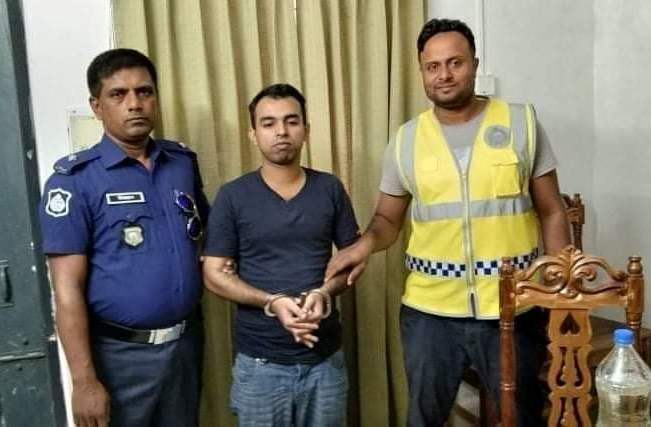 Police have arrested Saifur Rahman, the prime accused in a case filed for gang raping a woman in a dormitory of Sylhet Murari Chand (MC) College on Friday night.

The arrestee was identified as Saifur Rahman, a Chhatra League leader.

The law enforcers arrested the Chhatra League leader from Chatak upazila of Sunamganj on Sunday morning.

A newly-married woman was raped allegedly by a group of Chhatra League activists in a dormitory of Sylhet MC College on Friday night.

The incident took place after the couple went to visit the college on Friday. At that time, four to five youths took them inside the dormitory forcibly.

As the husband protested the matter, they beat up him and then, they took the couple to the college hostel at about 8:00pm. There they tied up his husband in a room of the hostel and raped the woman, said Shah Paran Police Station officer-in-charge (OC) Abdul Kayum Chowdhury.

On information, Police rescued the couple from the dormitory around 10:30 pm and admitted the woman to the One-Stop Crisis Centre at Sylhet MAG Osmani Medical College and Hospital, he added.

Among the suspects whose names were mentioned in the case, Saifur, Mahbubur, Arjun and Mahfuzur are students of MC College while Tarek and Rabiul are outsiders.

Earlier on Saturday, several hundred students of the college took to the streets, set fire and blocked the road, demanding immediate arrest of the rapists.

The protesters alleged that the accused are involved with Bangladesh Chhatra League (BCL) but they do not hold any post as there is no committee of the unit in the college.

They alleged that the authorities have kept the college hostel open when all the educational institutions across the country remained closed during the ongoing coronavirus pandemic.

Although the authorities were aware of the criminal activities in the dormitories they didn’t shut the hostels, they alleged.

The protesters also threatened to go for a tougher movement if the police fail to arrest the accused.